An Illustrated Year 2: The Snowy Day by Ezra Jack Keats 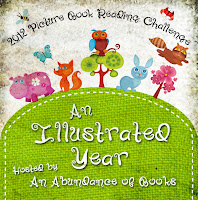 50 years ago this year, a little African American boy first played out in the snow in an American city. 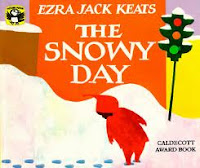 Peter wakes up, and excitedly looks out of the window. Seeing the snow, he puts on his red snowsuit and goes outside. He makes footprints, hits a snowy tree with a stick, makes a snowman and snow angels, climbs a pile of snow and slides down. He tries to save a snowball for the morning, but it melts, and he is unhappy until he wakes in the morning, finds that new snow has fallen and calls for his friend across the hall to play out again.

The simplicity and gentleness of this book delighted me as a little girl. I expect I encountered it about 10 years after it was published. Many comments under the NPR website story (the audioclip is wonderful, do listen to it) state that white listeners didn't notice Peter's skin colour. I certainly did as a small girl. I had encountered picture books with black characters before, but I seem to remember that they were all quite "exotic", living in Africa or the Caribbean. This (and the other books about Peter, Whistle for Willie and Peter's Chair) didn't make an issue out of Peter's skin colour- in fact, the book was criticised by some civil rights leaders for not addressing it. However, by simply showing Peter doing ordinary things- playing in the snow, learning to whistle and coming to terms with a new baby sister- Keats shows that children can look different, but have common experiences, and I think that this is very powerful. And for black children, the powerful experience of encountering people that look like them as protagonists rather than colourful background characters is demonstrated in the clip by the teacher who wrote to Keats telling him that for the first time, children in her class were not using the pink crayons to draw themselves; an experience that I have shared in my teaching career.

Sadly, this Caldicott medal winning book doesn't appear to be in print in the UK at the moment, but is readily available second hand online. I do hope Puffin are reprinting it.

This claymation video adaptation is delightful.

I hope your children enjoyed the snow this weekend!