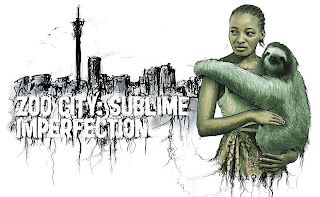 I am currently reading the wonderful adult speculative fiction novel Zoo City by South African writer Lauren Beukes. Set in an alternative version of Johannesburg, it is the story of Zinzi Lelethu December, former journalist and junkie, now a finder of lost things and 419 scammer. In Zinzi's world people who have killed are "animalled", carrying around an animal familiar as a manifestation of their guilt. Being animalled also confers special powers. This the result of a plague that spread from Afghanistan in the 1980s.

It's a truly wonderful book, I strongly recommend it, and one of the aspects I enjoy the most is the clearly identifiable African setting. The ingenuity, creativity and resourcefulness that Zinzi needs to survive  as well as the use of African languages: Nigerian pidgeon as well as a variety of South African languages and African French make the fantastical seem plausible.

The image above is created by a South African artist, and I think captures the spirit of the book perfectly. Zinzi's Sloth is not like Lyra Belacqua's daemon (visible soul) Pantalaimon from Philip Pullman's His Dark Materials; he is a permanent embodiment of her guilt, and like guilt, is a heavy load to carry around.

I have been thinking a lot about diversity in children's literature recently. It is something that has always been important to me since I started teaching nearly 20 years ago (wow! How did that happen?). It re-appeared on my radar firstly due to reading the forthcoming novel by Sarwat Chadda, Ash Mistry and the Savage Fortress. It was so heartening to read a fantasy featuring a British Asian protagonist with fantasy derived from Indian mythology rather than European, and made me wonder why US-based authors Chitra Banerjee Divakaruni (author of The Conch Bearer) and Nnedi Okorafor (author of, amongst other books, Akata Witch) are not published in Britain, where we have so many children with Indian and African heritage. I wrote about them here. More of Ash Mistry next week.

Secondly, someone tweeted a link to this blog post on the shocked reaction of fans of the forthcoming Hunger Games film to the casting of an African American actress to play Rue. One of the contestants in the Hunger Games, Rue, is clearly described in the novel as a black girl, so it is depressing that so many (white) readers assumed that she is a white character. Rock star Lenny Kravitz has been cast as Cinna. Cinna's description in the novel is less precise than Rue's but there is no reason why a character described as having close-cropped dark hair and golden-brown eyes should be automatically be played by a white actor. I have often wondered why in post-apocalytic novels and films, both British and American, it should be assumed that only white people survived.

And then I heard Trish Cooke, British author of So Much and actress of Dominican heritage, speaking on Radio 3's The Essay on her experiences of learning to read from books only featuring suburban white families, such as in the Peter and Jane books. None of the books she read featured children growing up in  families such as hers; black, working class, with 8 children and living on a council estate in Bradford (coincidentally, the same estate as the one featured in the film Rita, Sue and Bob Too (sweary clip, watch out if small people are around!). Tricia explained in the radio programme that after a while, she started to feel that there was something wrong with her family, and it changed her from being a lively, confident girl to being quiet and unwilling to contribute in lessons at school. She was determined that her son should not have the same experience, leading her to write picture books featuring families like theirs. They are beautiful, warm stories featuring loving families; I adore them.

It seems to me that we are fortunate to have so many amazing picture books showing diverse families, including culturally diverse backgrounds, single parents, children living with grandparents- but this not being the central point of the story. However, it is disappointing that in fantasy fiction for the age range known as "middle grade" in the US (roughly 8-12) which has been a best selling genre, when minority ethnic characters appear at all, they often appear as colourful backgrounds rather than as active participants in the story- for example, Parvati Patil and Lee Jordan in the Harry Potter series who are so under-developed as characters that I struggle to name them. The only non white character developed to any degree is Cho, Harry's first girlfriend, who is mainly noticeable for her drippiness.

Does it matter? Well, as I see it, if we are concerned about the number of books that children read, then we really need to ensure that there are books that children want to read, books that reflect them and their experiences- and books from a variety of genres. Novels with diverse characters need not always be social realist. Also, white children need to see positive representations of children from other cultures, particularly children growing up in fairly mono-cultural environments. There are of course wonderful publishers such as Frances Lincoln and companies such as Letterbox Library that celebrate diversity and seek out authors to write books doing so, but more needs to be done. Perhaps the advent of digital publishing will mean that there will be more opportunities for more variety of stories to be told.

The exception to the paucity of fantasy novels published in Britain with minority ethnic characters are of course Malorie Blackman's amazing Noughts and Crosses, which is due to be dramatised on Radio 4 next Saturday. The excellent comic book blog New Readers... Start Here has a series of great posts about diversity in comics, including some great ones about Characters of Colour.

EDIT: I have realised that I left out Salman Rushdie's amazing Haroun and the Sea of Stories and Luka and the Fire of Life, both wonderful, fantastical stories using references from the Arabian Nights and Indian mythology, but with a warmth and playfulness that I find missing from his novels for adults.
Posted by Ali at 20:00