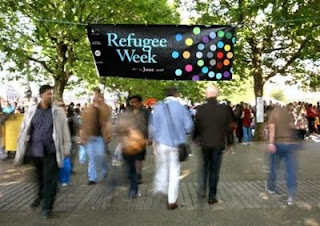 (photo: Nana Varveropoulou, via www.refugeeweek.org.uk)
20th- 26th June is Refugee Week. Here are my suggestions for books to read with children, to help them understand why refugees seek asylum in other countries, and how difficult it must be to arrive in an alien country.
When Hitler Stole Pink Rabbit﻿ by Judith Kerr
Judith Kerr (of Mog and The Tiger Who Came To Tea fame) was born in Berlin. Her father was a writer and critic, highly critical of the Nazis. After his book was burnt the family was forced to escape from Germany, first to Swizerland, then to France, and finally to England, and this book is a fictionalised version of their journey. While "Anna" and "Max"s' parents are struggling to make a living after their comfortable life in Berlin, the children's concerns are with making friends, settling into new schools when they don't speak French or English, and the impermanent life of a refugee. The second and third books in the trilogy, Bombs on Aunt Daisy (previously entitled The Other Way Round) and A Small Person Far Away continue Anna's story, and outline the difficulty of family relationships where the children are forced to take charge of the parents, when their language skills and social contacts are greater than that of the adults.
The Arrival by Shaun Tan
The story of a man who leaves his wife and children, and must create a new life for himself  in another country. Shaun Tan's story is told through distorted and mysterious illustrations show the alienating experience of immigration. There are problems in the old country (demonstrated by dragons overshadowing a city), but the new country is also strange and disorienting; there are odd creatures living in the Arrival's flat, the customs and language are strange. However, he learns from other immigrants, and is eventually reunited with his family. This is a rich and beautiful book, told through pictures, and would be a great book for an adult to share with young (6+) children, or for older children to share with each other to retell the story.


The Girl in Red and Pictures from the Fire by Gaye Hicyilmaz
These books are the story of Emilia and her family. Arriving in a housing estate, escaping from persecution in Romania, the family believe they are safe. Emilia goes to school, much to the joy of Frankie, who has a crush on her. But Portsmouth is not to be a safe haven for them; Frankie's mother starts a campaign against the Roma gypsies arriving in the estate, and tragedy ensues. Pictures in the Fire continues the story; a disturbingly claustrophobic tale that flits between Romania, England and the detention hostel where the family are living in an unnamed country and Emilia is obsessively drawing in a diary she has found with stolen crayons. Hicyilmaz is a wonderful writer; The Frozen Waterfall is a great read about economic migration and issues of belonging; I wish I had found it when I was teaching 10 and 11 year olds in North London as the Turkish children I taught did not see themselves and their experiences depicted in stories.

I urge anyone wanting to learn more about the recent history of immigration to London (Huguenots, Irish, Jews and the making of multicultural Britain) to visit 19 Princelet Street on one of its rare open days. It is an astonishing building that should be preserved.