The time is now

This week I have read two wonderful novels that have made me think carefully about time and history. Coincidentally Susan Cooper and Penelope Lively were recently honoured for their work, Susan Cooper with the Margaret A Edwards Award for significant and lasting contribution for young adult literature for Cooper's The Dark Is Rising series and Penelope Lively was made a Dame in the New Year's Honours list.

I have written already about my love for The Dark is Rising, the second book Susan Cooper's wonderful series. I also loved The Boggart. However I haven't read any of her other books, so when I saw this review on @chaletfan's blog I made sure I got hold of King of Shadows. I found it a wonderfully affecting read. In 1999 13 year old Nathan Field from South Carolina has been recruited to join a troupe of American boy actors who travel to London to appear in A Midsummer Night's Dream at the recently-opened Globe theatre on the South Bank of the Thames. Nathan is an unhappy boy. He has recently lost his father in traumatic circumstances. In London, he is lodging with a family and enjoying himself at the theatre, when he suddenly becomes dangerously ill. He is rushed to hospital, but when he wakes up, he is in London of 1599, on loan to Shakespeare's Lord Chamberlain's Men from St Paul's school, to play Puck in A Midsummer Night's Dream on request from Queen Elizabeth 1. He has switched places with an Elizabethan boy actor, also named Nathan Field. You can see his portrait at the Dulwich Picture Gallery in London. 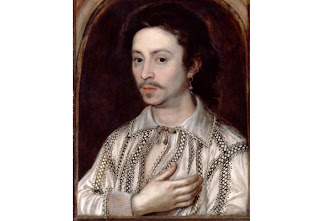 The atmosphere, smells, political intrigue and casual cruelty of Elizabethan London is evoked brilliantly by Cooper. I really enjoyed the theatre details, both modern and Elizabethan, and the relationship between Shakespeare and Nathan is beautifully touching. The only aspect of the novel that didn't quite work for me was the exposition at the end; I would have preferred some mystery about the time slip.

Mair and Peter Jenkins have just moved from Wales to the Cotswold village of Charlton Underwood. The children make friends with farmer's daughter Betsy Tranter, whose family have lived at World's End farm for generations. The woods around the farm hold a secret: they used to be the location of the village of Astercote, which was wiped out by the Black Death in the fourteenth century. The Jenkins family lives on the new estate, but the village is inhabited by families who have lived there as long as the Tranters. World's End Farm has another secret: it is the hiding place of a Mediaeval gold chalice, which is guarded by Goacher, a mysterious man who may or may not have survived the Black Death. But when Goacher and the chalice disappear, Betsy is taken ill with mumps and white chalk crosses start to appear on the houses of villagers with illnesses, Mair and Peter realise that they must find Goacher and the chalice to stop the village from cutting itself off, as it did in the 14th century.

Both novels make great use of history, but in slightly different ways. In novels by Penelope Lively (who studied History at Oxford) history seems to appear in layers over the landscape; here and there the new layers are thin so that the older layers seep through; in this, her first novel, the veneer of modernity is thin even with the inhabitants of the village. Once the chalice disappears, the deeper layers of superstition are visible. Mair, who as Evadne the district nurse identifies is in the pre-adolescent stage of dreaminess and empathy with the place, is able to imagine herself into the position both of the villagers and of Goacher, and is the key to putting things to rights.

In King of Shadows the history of place is significant, but also the emotional state of Shakespeare, mourning the death of his son Hamnet, and Nathan, mourning the death of his father. While reading this novel, which makes wonderful use of Shakespeare's words, both A Midsummer Night's Dream and Sonnet 116, "Let me not to the marriage of true minds/ Admit impediments...", I also was reminded of the opening lines of L. P. Hartley's The Go-Between: "The past is foreign country; they do things differently there". In Lively's work, the past is not foreign; it co-exists with the present, and the future, and this palimpsest approach is what makes her novels so rich and fascinating. I would recommend both these novels for confident readers of 9+.