Rebecca Stead's When You Reach Me is the story of sixth grader Miranda, growing up in 1979 in New York City. The story specifically mentions Amsterdam Avenue, which I believe is Upper East Side- in the 1970s this was a working class neighbourhood. She lives in a shabby apartment with her single parent working mother, and her best friend Sal lives in the same building.

One day while walking home from school, Sal is punched in the stomach without any forewarning by a boy who is a stranger. He runs away from Miranda and locks himself in his apartment. Then Miranda and her mother's spare key goes missing, and Miranda starts to receive mysterious letters from someone who seems to be wanting to warn her of something coming in the future.

This is a wonderful book, cleverly wrong-footing expectations from elements of a realist family story (Miranda's shifting friendships, the relationship between her mother and mother's boyfriend Richard, her mother's determination to appear on a game show) by the mystery and Science Fiction elements, which are foreshadowed by Miranda's refusal to read anything but Madeleine L'Engle's A Wrinkle in Time, which I wrote about here. In fact, many expectations are wrong-footed: the troubled boy who punches Sal in the stomach is the one who understands the time travel in A Wrinkle in Time, but the girl Miranda perceives as a stuck up airhead, Julia, is the one who explains it, albeit by the use of her diamond-chip ring! 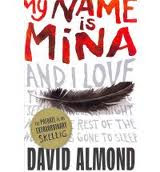 David Almond's My Name Is Mina is the prequel and companion book to the award-winning Skellig, which I wrote about here. In Skellig, Mina is Michael's friend, who is able to see the wonder in Skellig and explain it to Michael. This novel starts:

My name is Mina and I love the night. Anything seems possible in the night when the rest of the world has gone to sleep. It's dark and silent in the house, but if I listen close, I hear the beat beat beat of my heart. I hear the creak and crack of the house. I hear my mum breathing gently in her sleep  in her room next door.


12 year old Mina tells her own story (as does Miranda) but it is not a straightforward narrative. Miranda is addressing the person sending her the mysterious letters throughout When You Reach Me, but Mina is addressing herself through her diary, story writing and poetry. Mina is an intelligent and creative thinker and a gifted writer, through which Almond (a former teacher) makes some pointed comments about the rigidity of the school curriculum and the obsession with testing, targets and results in the English education system.

Like Miranda, Mina is growing up with a single mother, but unlike Miranda, remembers her father who has died. In a passage where Mina describes running out of school where she is being teased, she goes into a tunnel under a park, into the Underworld where she is planning to seek Hades and Persephone and ask for her father back. I am not ashamed to say that this passage (written in the third person as Mina seeks to distance herself from it) drove me to tears on a packed train to Brighton. However, five minutes later some word play made me laugh out loud.

Throughout the novel Mina, from her vantage point in her favourite tree, notes the nesting, laying eggs and hatching of baby blackbirds, heralding the coming of spring after a long north of England winter. As Spring arrives, so does a boy and his family in a house opposite, and Mina feels ready to leave the safety of her tree and choose interaction with children of her own age.

I read these wonderful novels one after the other, and noted in both a tender and loving relationship between the girls and their mothers. The relationships are not always perfect, and in both books there is a recognition that a strong relationship between mother and daughter is not enough for either mother or child. In both cases the girls recognise that their mothers need to be more than simply parents (important though this is) and both girls eventually seek out new friends, frightening though this is. In When You Reach Me, indeed, Miranda is beginning to think about boyfriends, although this is not a big part of the novel.

These are fantastic books. Although it would not be necessary to enjoy When You Reach Me to have read A Wrinkle in Time, or My Name is Mina to have read Skellig, I hope that readers will go on to seek out those marvellous books too. Both books are suitable for readers 10+ due to their complexity.

In My Name is Mina a teacher sings the Scottish miners' lullaby Corrie Doon, which I think is a beautiful expression of love of a father for a child and also linking the ideas of death, loss, underworld and rebirth.