I was recently sent the much-awaited sequel to Lauren Oliver's Delirium, Pandemonium. These are highly recommended, far superior to many Young Adult dystopian fantasies. In an alternate USA, where love has been classed as a disease, a repressive government insists on all young people being "cured" through a medical procedure similar to a lobotomy. A young woman named Lena has escaped the city and joined a rebel group, when she meets the son of a government official. He tells her of the banned books his father locks away. The one he describes is L Frank Baum's The Wonderful Wizard of Oz.


This American classic was first published in 1900. It was a huge success, and although Baum tried to leave Oz behind in later years, his child fans insisted on more. After his death in 1919 other writers continued the series. Baum's intention was to write American fairy tales, but without what he considered the frightening aspects of those books, although Princess Langwidere from Ozma of Oz with her collection of interchangeable heads scared me as a child!

Probably most British people are more familiar with the musical film version, The Wizard of Oz (1939). As with Baum's own film version of it and those made later, Dorothy is not a little girl, but a teenager; Judy Garland was 16 when The Wizard of Oz was made. Denslow's illustrations from the Baum's books clearly show her as much younger.

By one of those serendipitous coincidences, two other cultural experiences have made me think about Oz this month. The first was watching the original film of True Grit (1969) with John Wayne. I am not normally a great Western fan, but I love this film, and it has a great many Oz resonances for me.

The story of a young girl, Mattie Ross, who is on a quest: this time not to get home, but to find the murderers of her father, she must exhibit a great deal of courage and persistence, and to team up with a less than prepossessing group of companions to do so. 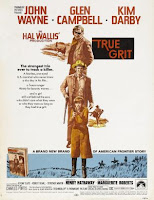 While Dorothy is by far the superior of her companions in courage and intellect, Mattie has the moral superiority over her companions; her avowed aim is justice for the murder of her father, while La Boeuf and Rooster Cogburn want the reward Chaney's capture will bring. The process of the journey and achievement of "natural justice" in both The Wonderful Wizard of Oz and True Grit is redemptive to the companions: their characters are reformed. Mattie and Dorothy both get to return home. Interestingly, in Baum's book Dorothy does not stay in grey and dreary Kansas for long; soon she and Aunt Em and Uncle Frank are permanently living in beautiful, colourful Oz (which is much like Hollywood where Baum moved after the success of his Oz books); clearly novel-Dorothy doesn't subscribe to the MGM view that "there's no place like home"! 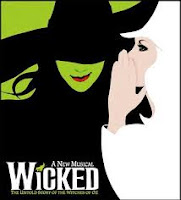 The second event was a trip to the theatre to see Wicked, a lovely surprise from my lovely boyfriend. Billed as the "untold story of the witches of Oz", it is based on the series of novels by Geoffrey Maguire. Events are told from before Dorothy arrives in Oz and while she is there. I haven't read the book, so please forgive me if the treatment of the story in the novel is different! Wicked is the story of Elphaba, a girl born to the governor of Munchkinland with green skin. She has a sister, Netta Rose, who is born disabled due to their father's insistence that their mother eats a herb to ensure that she is born with white skin. They are both sent to Shiz University where they meet the spoilt, shallow Galinda. Through a misunderstanding, Galinda (Glinda) and Elphaba become room-mates, and eventually, friends. Elphaba's strong sense of justice and fairness leads her to travel to the Emerald City to obtain justice for the oppressed talking animals of Oz, where she, like Dorothy before her, expects to meet the Great and Powerful Oz, and finds that he is something very different. Elphaba and Galinda's reactions to this knowledge are different, causing a rift between the friends. Will they become reunited?

It should be noted that the novel of Wicked is not aimed at children, Pandemonium is definitely Young Adult (13+) and the 2010 film of True Grit is a 15. However on the two occasions I have been to the theatre to see Wicked, children of I would guess 8+ have been in the audience. I would recommend the book of The Wonderful Wizard of Oz to 7+, and of course the film can be enjoyed by all ages.

The best known song from Wicked, much murdered by the cast of Glee and American Idol contestants(!) is Defying Gravity.