I am very ashamed that I haven't read David Almond's Skellig before. It is a book that I have known by repute for a long time, and I must confess that one of the things that put me off reading it was the fact that it is so widely read as a lower KS3 set text in Secondary schools. I imagined that it would be one of those tediously contemporary "issues" novels that we read at Secondary schools, all teenagers, scooters and youth clubs, that are embarrassingly out of date within 5 years. How wrong I was.

Skellig was first published in 1998, one year after JK Rowling's Harry Potter and the Philosopher's Stone and three years after Philip Pullman's Northern Lights, arguably two of the novels that ignited the current interest in children's literature. It was David Almond's debut novel, and was a remarkable success, winning the Carnegie Medal (also won by Philip Pullman in 1995 for Northern Lights). It was made into an opera at Sage Gateshead, with music by Todd Machover and libretto by David Almond (you can read reviews and listen to clips here) and dramatised by Sky 1 with Tim Roth as Skellig- see the trailer here.

Michael, his dad and pregnant mum have just moved house. They have bought a house in need of extensive renovation, expecting to be able to renovate it before the new baby comes, but she arrives prematurely and in need of a great deal of neo-natal care. Michael is missing his old house, his friends Leakey and Coot and is very worried about his mum and sister. In the garden of the house there is an old garage, which is falling down. The family had intended to demolish it and redesign the garden, but hadn't had time to do it. While exploring the garden, Michael opens the door and finds an old man in there, apparently dying.

Next door to Michael and his family lives Mina and her mum. Mina is home schooled. She challenges Michael's view of the world, with her rejection of many of Michael's values and assumptions; she and her mother believe, like William Blake, that institutions (such as school) and society crush our natural curiosity and imagination, and who assists Michael in recognising the wonder of Skellig, due to her knowledge of the anatomy of birds and the poetry of William Blake, which is a recurring trope throughout the novel. Blake of course is (along with Milton) an inspiration for Pullman's His Dark Materials trilogy (in particular, the visions of heaven and hell, and the portrayal of religion's antipathy for sexuality, particularly female sexuality). The poem The Tyger (see an image of the original manuscript here) is quoted throughout. Mina's love of birds (and knowledge of owls) and night time are expressed through her repeated quotation of Night from Songs of Innocence. I was also forcibly reminded both of Blake's images of angels (Skellig's splendour once he is revived by Michael's ministration of pork char sui, spring rolls, brown ale, aspirin and cod liver oil capsules reminded me of the image above) but also the repetition of three sided relationships (both successul and unsuccessful) throughout the novel recalled Blake's portait of Newton. 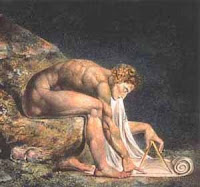 Mina, Michael and Skellig's triangular relationship, exemplified first by their three sided dance and then by Michael's vision of Mina and his wings. There is a satisfying triangle with Mina, her mum and Michael, and between Leakey, Coot and Michael, which is threatened by his growing friendship with Mina. Coot's jealousy of Mina means that a triangle between him, Michael and Mina is unbalanced. The only close relationships that are not triangular in the novel are those between Mina and her mother, and Mum, Dad, Michael and the baby, although it could be argued that there is a relationship between Mina, her mum and Blake, and perhaps that there are triangles between Michael, his mum and dad and the baby, her mum and dad.

This was a wonderful read- I read it in two days because I simply couldn't stop. It is a rich and deep text, but still wears its learning lightly- it could be read as an allegory of the power of love and the imagination or belief, or it could be equally enjoyed as a magical story about a boy finding an angel in his garage. I was delighted to see that David Almond has written a prequel to Skellig, My Name Is Mina. I can't wait to read it. And now I'll maybe overcome my prejudice against Louis Sachar's Holes...
Posted by Ali at 17:00