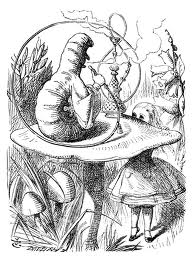 Alice's Adventures in Wonderland (1865) was not the first children's fantasy novel (that is generally held to be F. Paget's The Hope of the Katzenkopfs), but it is arguably the most influential. The story of Alice, falling asleep then following a white rabbit wearing a waistcoat and pocket watch down a rabbit hole to a magical land full of bizarre creatures needs no introduction. However I think what is often lost on modern readers is Carroll's radical departure in tone from previous fantasy. Alison Lurie has characterised novels such as Charles Kingsley's The Water Babies (1863) and George Macdonald's The Light Princess (1864) as resembling "...a kind lady or gentleman delivering a delightfully disguised sermon".  Carroll's story is groundbreaking in that Alice is not being gently (or less than gently) chided for her faults by a creature resembling an adult, being shown the error of her ways and becoming a better and wiser girl. She is in general the voice of reason in a confusing world, who is protesting at the absurdity of adult authority figures such as the Duchess, the Queen of Hearts and the Caterpillar. The characters who do try to chide her are ridiculed for doing so, and at the end of the novel Alice defies them all: "Who cares for you?... Why, you're nothing but a pack of cards!"

The Alice books were extremely influential on children's novelists from the late nineteenth century onwards. Texts which obviously follow Carroll's pairing of adventures in fantasy landscapes with nonsense include GE Farrow's The Wallypug of Why (1898) and Mary Louisa Molesworth 's The Cuckoo Clock (1877), the latter combining the nonsense with a moral tale.  As I commented in an earlier post, China Mieville has noted Carroll's influence on his work.

One of the strangest may be Speaking Likenesses by Christina Rossetti (1875). It is three tales-within-tales; an aunt is telling the stories to her little nieces. The first is the story of Flora, whose discontent at her own birthday party leads her to a strange house, where there is another party going on. The guests are monstrous children whose bodies exhibit the unpleasant character traits that Flora's guests have been exhibiting (slipperiness, selfishness, prickliness, angularity and roughness). After some frightening and unpleasant experiences Flora finds her way home, where she finds that she has fallen asleep, apologises for her bad behaviour and is forgiven.

The final story is that of Maggie, who in contrast to Flora, who lives in a large house with extensive grounds, is the orphan grandaughter of Dame Margaret who keeps a toyshop. Just before Christmas Maggie goes on an errand for her grandmother, and slips and bangs her head on the way. She is teased and frightened by similar monstrous children, including a greedy boy whose only facial feature is a huge mouth, who demands the chocolate she is to deliver: 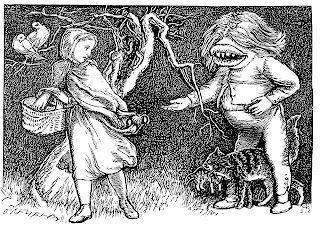 Unlike Flora, Maggie defies the terrors she faces, and delivers her basket. However she is not rewarded at the end of her journey, and, hungry, cold and frightened, she must walk home again. On her return journey she fills her basket with a freezing pigeon and an abandoned kitten and puppy, and is rewarded by knowing that she has carried out a good deed, and by tea and buttered toast with her grandmother.

This is a very strange little book (it is not in print; my copy is a facimile of the American edition, thankfully with Arthur Hughes' illustrations, from the University of Michigan Library), not least because of the insistance on bodily, emotional or social discomfort for the good of children's characters. As I have said, it is a tale within a tale; the framing device of an adult telling a child a story is not unusual, but there are regular interjections by the children, allowing the aunt to point a moral, or explain a word or phrase. Of course nineteenth century readers were still accustomed to read epistolary or multi modal novels with a strong narrative voice, such as Wuthering Heights, Wilkie Collins' The Moonstone, or Samuel Richardson's Pamela. It is interesting to read not only in the light of Rossetti's poetry (the consumption and denial of food is reminiscent of her poem Goblin Market), but also in relation to Alice in Wonderland and other nineteenth century fantasy.

I was reminded of Marion St John Webb's Knock Three Times by a very dear friend recently, so I had to dig it out and re-read it. First published in 1917, it was illustrated by Margaret Tarrant, one of the best-known illustrators of the period. 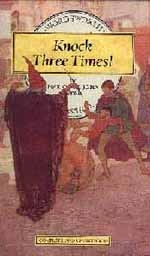 ﻿Jack and Molly are twins. Their Aunt Phoebe always sends practical presents. Jack is delighted to get a box of paints. Molly is hoping for a silver bangle: instead she receives a rather ugly grey pincushion, shaped like a pumpkin. Molly is disappointed, but takes it up to her room at bed time, and, trying to convince herself that it will be useful, sticks a pin into it. That night she is awoken by a bump as the pumpkin pincushion rolls off the dressing table, falls to the floor and rolls out of the house. She and Jack follow it through the garden and into a wood, where they see it knock three times on the trunk of a tree. The tree trunk opens, leading to a forest in another world. The children learn that this world is known to its' inhabitants as the Possible World, who term Jack and Molly's world (our early 20th century world) as the Impossible World. The pumpkin is in fact the prison of an evil dwarf who has caused the King's daughter's death. Molly has accidentally broken the spell banishing it to the Impossible World, and she and Jack agree to help to return it there.
There are some Carrollian nonsensical aspects to the novel; for example Glan's explanation to Molly and Jack that they have played in the wood many times but never found their way to the Possible World because:
"There are two sides to every tree, just like there are two sides to every question. When you walk round a question, do you see both its sides? No. It is only when you go into a question that you see this side and that. Well then- when you only walked round that tree it stands to sense that you couldn't find yourself here.."
I found this an enjoyable re-read. It is eerie and exciting; the fantasy elements are well managed within the adventure, and the relationship between Molly and Jack is one of equality, which is interesting: even free-thinking feminist Edith Nesbit, a near contemporary, almost always had brothers as supervisors of their sisters. My copy is a Wordsworth Classics one, without Tarrant's illustrations, but you can get second hand copies the '30s fairly easily.
I was struck by some Alice touches (and indeed some of Rossetti's Goblin Market) in Guillermo del Toro's 2006 film, Pan's Labyrinth. There is the underground world, only accessible to a little girl, the focus on doors, doorways, key holes and other entrances to this world that are often tricky to navigate. There is dangerous food and drink (also of course present in Goblin Market), and strange creatures, some benign and some murderous. Of course Ofelia is on a quest, unlike Alice, so I will return to the film at a more appropriate time, but the image that first made me think of Alice is, I think, strikingly reminiscent both of Tenniel's illustration and Alice Liddell, the "original" Alice: 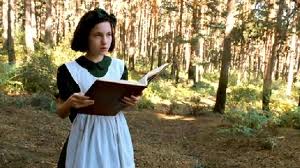 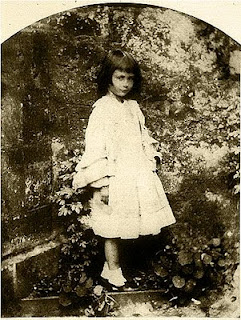