I love fantasy fiction because it does what recent literary fiction in my opinion doesn't do very well at the moment- it discusses the big issues. Much literary fiction seems to be to a miniature portrait of a particularly urban existance- and really, how many novels about the mid-life crises of well heeled urbanites can we read without throwing them out of the window? I imagine that there will be a slew of novels about the trials of former employees of Lehmans or Goldman Sachs within the next year or so, down to their last Ozwald Boateng suit and bottle of Chateauneuf.

As Amanda Craig wrote a year ago, recent novels with a broad sweep that have attracted praise recently seem to be historical novels. However my argument unsurprisingly would be that fantasy novels, or at least well written ones, contain the wealth of characterisation, and the big ideas, that Craig and others have praised in the work of Sarah Walters, Sebastian Faulks and AS Byatt. Since fantasy and speculative fiction is not depicting a familiar world, it must, in order to be convincing, portray a range of characters that are compelling yet believeable. Since it is creating an alternate world, successful fantasy/ speculative fiction must create a whole society, so the characters must represent all strata of that society. Fantasy and Sci Fi tends to put it's new worlds in peril, so speculative fiction deals with the big ideas: destiny, our place in the world, the future of humanity, the viability of the planet to sustain life (whether the planet is ours or not).

China Mieville is an awardwinning fantasy/ speculative fiction author. I have been reading his breathtaking existential crime novel The City & The City, about the investigation into the murder of a young girl in a Balkan city in a formerly repressive country. However, this novel explores String Theory: the idea that two objects can coexist in a single physical space. So while Inspector Borlu is investigating a crime in the city of Beszel, he must negotiate around the city of Ul Qoma which inhabits the same geography, but it is illegal for the citizens of the two cities to acknowledge each other, and to ignore the separation, or Breach, is akin to treason. It is a fascinating novel, leading me to consider the ways that in our cities, different people experience physical space in completely different ways. 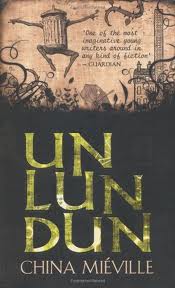 During the summer I read Mieville's Un Lun Dun. It is the story of two girls who live on a London housing estate. Strance things begin to happen to the girls, Zanna and Deeba, and their friends, and they find their way into Un Lun Dun (Un-London), where all the rubbish and broken appliances thrown away in London end up. In Un-London, the girls discover that Zanna is the Shwazzy, the Chosen One who must defeat the Smog threatening to engulf the city.

Mieville has acknowledged the influence of Lewis Carroll in an interview; the inventive language and the fantastic characters Deeba and Zanna encounter (a sentient diving suit, a man with a birdcage for a head, a ghost boy), and the familiar inverted- evil flesh eating giraffes, houses and even Westminster Abbey becomes Webminster Abbey, with Black Windows that seek to destroy the group on their quest.

It was an enjoyable read, challenging and absorbing, but somehow it didn't quite work for me. Mieville has stated that he set himself some challenges for this novel: to liberate the sidekick, who in fact turns out to have the heroic qualities required to save the city, and to make an animal universally considered cute into a baddie. Maybe this is what jarred for me: I couldn't quite buy into his world; it didn't seem to me that Mieville fully believed in it himself. In addition, I couldn't properly visualise Zanna or Deeba, so it was difficult for me to become emotionally involved in their quest. It feels at time as though Mieville is winking at the adult over the child reader's head. A successful fantasy novelist for adults (such as Terry Pratchett or Neil Gaiman) seems to me to have far more respect for their child readers of their juvenile fiction.
Posted by Ali at 17:25