Today is Russell Hoban's 86th birthday. As regular readers will know, I went to hear Russell speak about Riddley Walker, arguably his most famous book, at the Guardian Bookclub event, where I met up with fellow Hoban enthusiasts. Every year on his birthday his fans celebrate by releasing Hoban quotes into the wild either physically or virtually. They're collected here at the Slickman A4 quotation event, named after Hoban's preferred writing paper; A4 yellow.

The Kraken, his fanclub, also club together to give him a present, and this year I was honoured to be asked to present it. The bottle was bought from an amazing shop, Gerry's in Soho- The Kraken rum, and a certificate of adoption for a bat family. I was very lucky to have an hour with Russell. He seemed very happy with his presents, and happily posed for photos with his rum: 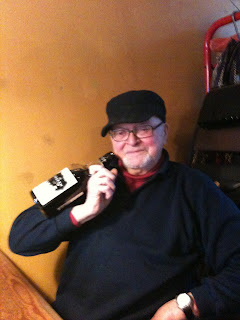 He was very taken with the label, as he is fascinated by squid 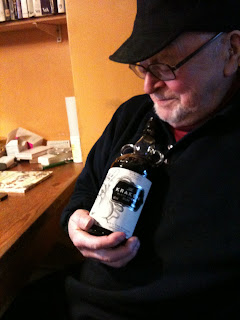 I was very priviledged to be shown the proofs and a mock up cover of his next novel, to be released in March next year. It is a Young Adult novel to be published by Walker, called Soonchild. It is the story of a Shaman and his relationship with his unborn child, and it is beautifully illustrated by Alexis Deacon. Russell referred to Deacon as a "genius".

I spoke with Russell about How Tom beat Captain Najork and his Hired Sportsmen, which was a childhood family favourite (Aunt Fidget Wonkham Strong's exhortions to Tom to eat up his mutton slump and greasy bloaters have entered my family's lexicon!), and we discussed Quentin Blake's illustrations. He showed me another of his picturebook collaborations with Blake, The Twenty Elephant Restaurant. Russell told me that he often gets ideas for books after talking with his wife, Gundula. The idea for Captain Najork came from a picture in a book she showed him of a real Captain Najork in a large rowing boat. On wondering aloud who rowed it, Gundula said "Why, his hired sportsmen of course!". The Twenty Elephant Restaurant came about after Russell had made a sleeping couch for his workroom. He felt it was strong enough to hold elephants; she asked how many!

I was delighted to find that Russell was a big fan of Victorian fiction, and we discussed the awfulness of the children in Dombey and Son, our favourite Dickensian gin drinkers (his: Sairey Gamp from Martin Chuzzelwitt, mine: The Infant Phenomenon from Nicholas Nickleby), Elizabeth Gaskell, Margaret Oliphant's ghost stories and George Eliot. He also loves Chekov's short stories, as I do. He does a lot of reading at his wife's family home in Germany.

Russell very kindly signed my copies of Riddley Walker (which I keep inadvertantly donating to people; this one will not be let out of my sight), Bread and Jam for Frances 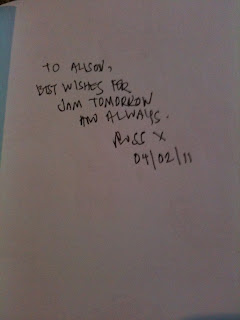 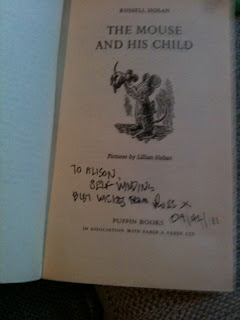 All in all, it was a lovely hour, and I was sad to draw it to a close as a photographer arrived, but it was wonderful to be able to thank him for the pleasure his books gave me as a child and continue to give me now.
Posted by Ali at 17:02