On Friday, I went to an excellent British Library event celebrating The Hobbit's 75th birthday. One of the speakers was David Brawn, who spoke about Tolkein's illustrations for the book, including his maps, and again I was reminded of my love for stories with an epic journey and maps in books. 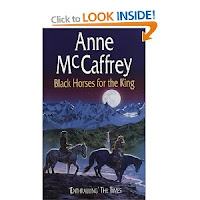 Anne McCaffrey is probably best known for her Dragons of Pern series of fantasy novels for young adults and adults, and I had never heard of this novel until I saw it in the wonderful Pulp Fiction Books in Edinburgh. It's the story of Lord Artos (later King Arthur) travelling to France to buy warhorses strong enough to carry a man and armour. Galwyn, a Romanised Celt with a facility with languages, travels with Artos and his band to France to help to translate. Galwyn's pony is the only one that stops the most valuable horse from injuring the other horses and men, so he gains a privileged position, more so when he learns the developing trade of the farrier, and this puts Galwyn, Artos and the horses in danger.

This was a great read, combining horses, a "quest" and convincing evocation of history, and a useful map of Galwyn's journey with Roman names for British towns. I really enjoyed it. However, the climactic scene (much like in the Hobbit!) Galwyn is injured and takes no part in, which for me is a little less than satisfactory. However, I highly recommend it for anyone 10+ who loves horses. 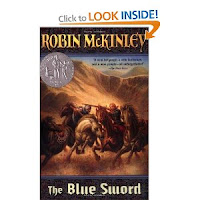 Robin McKinley's  The Blue Sword, winner of the 1983 Newberry Honor award, is the story of Anghared (Harry) Crewe, an orphan in a period that feels like 19th Century. In a sort of fantasy version of colonial India (Daria) Harry does not fit in. She is not a dainty, demure girl; she is a strapping young woman who loves riding and is unfashionably enthusiastic about the history and culture of Daria and the part of the country called Damar, which is uncolonised.  One evening the army station where Harry is living is visited by Corlath, leader of the Hillfolk (a tribe of Damarians) warning of an impending invasion from the North, a land of evil magic. Corlath spots Harry, and feels that her destiny is linked to the future Damar, so he kidnaps her.

As is the way in much epic fantasy, Harry's failings as a colonial miss are advantages for life with the Hillfolk- she is strong, brave, a good horsewoman and quick to learn sword fighting. She discovers that she has a "kelar" (magical second sight linked to Corlath's royal bloodline) and in a vision sees Lady Aerin, an ancestor of the royal family. She enters a tournament to become a Kings' Rider, succeeds and becomes Harimad-Sol. Her destiny is linked to the future of Damar in ways she could never have foreseen.

I enjoyed this book greatly, although there are some implications of the colonial theme which now (after two Gulf wars and other post-colonial legacy in the Indian subcontinent) seem rather uncomfortable. Personally I found the journey of Harry and Corlath rather hard to visualise; I would have liked to have had a map to follow. Having said that, I'm sure I'd have loved this book as an 11 year old, and would have loved the horsey aspects as well as the sword fighting and magic.

Sadly it seems that both these books are out of print, but there are plenty of second hand copies on most of the common second hand book sites.