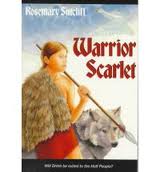 This month's theme from Playing by the Book's "I'm looking for a book about..." carnival is disability. Of course, it is a very appropriate theme given the wonderful closing ceremony of the awe-inspiring Paralympics was yesterday. I am very proud that my city has been the host to this and the Olympics, and has welcomed athletes and visitors from all over the world with the humour and creativity our beautiful city is famous for.

When Zoe announced that this month's theme would be disability, I immediately thought of Rosemary Sutcliff's  Warrior Scarlet. It is the story of Bronze Age Drem, who is 9 at the start of the novel. He lives with his mother, brother, grandfather and his foster sister Brai in a village on the South Downs. Drem is expecting to join the Boy's House, train as a warrior and earn his Warrior Scarlet cloak by killing a wolf. However, Drem has been born with a withered right arm. Overhearing his grandfather's doubts about his ability to kill the wolf and fully become a man, Drem runs away, but meets Talore the one handed hunter who convinces him that if he use a bow and arrow, he must learn to throw a spear so well that others forget that he doesn't do so by choice:

"If the thing is worth the fight, fight for it... There are ways- ways round, and ways through, and ways over"

Drem does indeed learn to throw a spear, to ride and to fight, and he joins the boys' house. However, his path to manhood and his warrior scarlet is not straight forward or easy, and he does indeed both fight for it and find ways round, through and over.

I am a huge Rosemary Sutcliff fan. Her books lyrically and vividly evoke history, and I would certainly credit them with my love of visiting historical sites. Her research was impeccable, as The Independent noted in her obituary in 1992. She contracted a form of rheumatoid arthritis as a child and used a wheelchair for much of her adult life. She wrote sensitively about disability in several of her novels, both from the point of view of her characters and partly about the often cruel behaviour towards disability in the societies she wrote about.

Warrior Scarlet is perhaps my favourite of her novels. I love that Drem's character is influenced by his disability, but it is not informed by it. In many children's books, a period of disability is a test that characters must go through in order to become better people (such as Katy in What Katy Did or Deenie in Deenie) or disabled characters have special powers (Percy Jackson in Rick Riordan's novels who has dyslexia and ADHD but is the son of a God), but for Drem, his disability is something that he must learn to manage in order to become a functioning part of his society. The adjustments that he makes and ultimately the concessions that his tribe makes allows him to do this, and after all, isn't that what the able-bodied world should be doing with people with disabilities? Shouldn't that be our Paralympic legacy?