Today I have a guest post from Niamh Arthur, aged 10. She is writing about Judith Kerr's trilogy, Out of Hitler's Time.

When Hitler stole Pink Rabbit is one of my favourite books.  Anna is a 9-year-old girl in 1930s Germany.  She soon has to move away because her Jewish family think that Hitler will win the elections.  They go through many countries.  I like this book as it shows how her life would have been – frustrating, scary and secret. 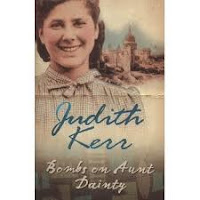 Bombs on Aunt Dainty is the second book in the trilogy.  Anna now lives in London but her family cannot afford the hotel, so Anna has to get a job.  She goes to secretarial school, but soon has to move to the countryside.  This book is very good at explaining how terrifying and sleepless living through the blitz would have felt.

A Small Person Far Away is the final book in the series, it takes place after the war.  Anna’s mum is ill with pneumonia in Berlin, so she has to leave London, her husband, and her new job.  This book is set out differently to the other books as it is like a diary written in the third person. The chapters are different days which makes some very big chapters.  I did not like the way it was set out.  There were a few places where it would have been better to have split it into new chapters.
Despite that, this is my favourite series of books because her description of how Anna feels is amazing and the plot is very well thought about.

Thank you Niamh! This is a wonderful guest post. I haven't read A Small Person Far Away but you have convinced me to look out for it. The BBC's amazing Desert Island Discs archive includes a programme featuring Judith Kerr, which can be found here. She reflects on her own childhood, which was the inspiration for this trilogy.
Posted by Ali at 21:38