On Monday 22nd November, I went to The Guardian bookclub to hear the great Russell Hoban speak about his novel Riddley Walker. He was witty, pithy, interesting and although clearly physically frail (he is hard of hearing and needed some help to get to the stage) he is still inventive and playful with language and still has an urge to write. It was a joy to be there and to meet up with other Hoban enthusiasts, and while it can sometimes be disappointing to hear writers talk about their work, on this occasion it was illuminating. 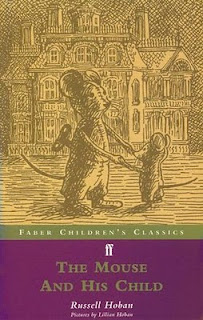 Re-reading Riddley Walker, I thought about other Hoban novels I have read (or had read to me) over the years. The absolutely delightful Frances books, especially Bread And Jam For Frances, are great fun for adults and children to read together, with rhymes and songs that Frances sings and beautifully observes egoccentrism of small children. But I felt that many of the themes and images in Riddley Walker are preceded in The Mouse And His Child.

The novel was first published in the States in 1967, and in the UK by Faber & Faber in 1969. My Puffin edition was published in 1976. It is the story of a clockwork toy, a mouse holding the hands of a child mouse. When their clockwork is wound up the larger mouse turns in a circle, lifting the smaller mouse up and down. When the novel starts, they are living in a toy shop with other clockwork toys: a rather snooty elephant and a seal. The child longs to live in a very superior dolls house in the shop with the elephant as his mother and the seal as his sister.

The Mouse and Child are bought as a Christmas decoration, and for some years they are packed away for most of the year and come out for Christmas. The children of the house are not allowed to touch the clockwork toys, which begs the question: are they toys if they are not played with? and what is their purpose? However, the toys are broken and thrown away. They are rescued by a tramp, who tries to repair them. He leaves out some cogs and wheels, so the Mouse is now walking forward, pushing the Child backwards in front of him. The Tramp winds them up and sets them off on their journey. On leaving them, he bids them "Be Tramps".

The Mouse and his Child suffer a series of misadventures, including rusting apart, but eventually achieve their heart's desire- to be self winding, and to have a home and a family. Along the way, with their allies, they defeat the tyrannical Manny Rat. At the end of the novel, the Tramp peers at them in their home and bids them to "Be happy".

There are several themes in the Mouse and His Child that I feel are also present in Riddley Walker. Firstly, prophesies. Lorna, the Tel Woman in Riddley Walker, prophesies "the old going out and the new coming in", the moves to reclaim the lost "clevverness" that created the "1 big 1" that lead to the great explosion that destroyed civilisation. The Frog in The Mouse and His Child is in fact a fraud, but he prophesies that "a Rat shall fall and a Dog shall rise", which is how the defeat of Manny Rat comes about.

In both novels, Hoban makes use of rhyme, drama and story. The dramatisation of the Eusa tale in Riddley Walker leads to Riddley leaving his home, and sets him on his way to Cambry. The discovery of the Punch puppet puts him at odds with authority. In the Mouse and His Child, the encounter with the Caws of Art theatre group enables the Mose and His Child to make their first defeat of Manny Rat. Both novels have songs and rhymes running throughout, which both further the narrative and comment upon it.

Finally, both novels have protagonists who are searching for their place in the world. Riddley is a 12 year old boy who loses his father very shortly after his "naming day", which in Riddley's world is an entrance to adulthood. So he is both officially and practically independent, but he is still an adolescent. He is in Hoban's words, "looking for his space in the cosmos". His journey is both a spiritual and a material quest. The Mouse and his Child are similarly escaping from a life of gruelling hardship (they are put to work for Manny Rat in a dump; Riddley works with his father at the diggings, on a treadmill) and are also looking for their place in the world, their own "territory": a home and a family.

Riddley Walker is an incredibly challenging read. Hoban created a new language- a post-apocalyptic English- to write in. But I feel it is well worth the effort, and I recommend reading the novels in tandem.
Posted by Ali at 16:27