My, 2011 has seen some sad news already. Pete Postlethwaite, one of my favourite actors, Mick Karn, whose band Japan was incredibly important in opening my 13-year-old musical mind with their album Gentlemen Take Polaroids, and now Dick King-Smith, a prolific children's author. He will be best known as the author of The Sheep Pig, filmed of course as Babe, and The Queen's Nose which was a very successful BBC children's series, but I remember Dick King-Smith for two other books.

I taught for most of my career in inner-city, ethnically diverse schools. I had a delightful class of year 4 children (8 and 9) in Tottenham. They had an amazing sense of humour, they were creative, enthusiastic and great fun to teach. We were doing a Geography topic on contrasting locations, and we were looking at farming. We went on a trip to Capel Manor, where the children marvelled at the space, and were terrified of shire horses. We saw bluebells and a fox (not so amazing for the children...) They loved it.

I always made a point of reading a class novel to my classes, whether they were Reception class or Year 6, about to go to Secondary school. And this class was no different. To carry on with the theme of the topic, I read them Sophie's Tom

Sophie is a little girl who lives on a farm with her mum, dad and brothers. She longs to be a farmer. For her 5th birthday, she receives lots of presents, including a toy farm, but what she really wants is an animal of her own. She decides to adopt a stray cat, Tom, but her parents are against it. Sophie, being a determined young lady, has some plans to help her get her way... My very ethnically diverse class (in a school where 38 languages were spoken) who, as I have said were not at all familiar with farms and animals absolutely loved this book. They adopted  Sophie's favourite insult, mowldy, stupid and assive, and laughed uproariously at her cheekiness. 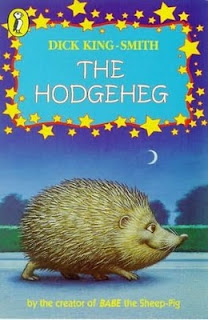 The following year I taught Y5, another very diverse class, with a small group of children who really struggled with reading. They could read the words in books (decode) but they had real problems with making sense of what they read. I found it hard to find books that would interest them, that were challenging enough but not so challenging that they would be put off reading them. Again, Dick King-Smith came up trumps (as did Anne Fine). The Hodgeheg (once they understood what a hedge was, and a hedgehog) was a winner. As well as having it as a group reading book I had a copy of it in the class library, and had to draw up a rota for the 5 children in the group to read it. Antwone's mum bought it for him at the bookfair, because it was the first time he went home talking about a book since he'd read Spot by himself in Y2.

So goodbye Dick King-Smith. I wonder if these classes, who will now be in their late teens and early twenties, have heard the news of your death, and remember reading your books when they were 8, 9 and 10. I hope they do.

Dick King-Smith was never Children's Laureate. I don't know if he would have wanted to be- I think he was quite happy on his farm in Gloucestershire, writing. Anthony Browne's tenure comes to an end later this year, and the public are invited to nominate an author. I have nominated Malorie Blackman, who I think would be a brilliant Laureate. She is a passionate advocate of reading, and writes consistently brilliant books for older children and young adults (she writes picture books too, but is more well known for her novels). You can listen to her on Radio 4's Open Book here, and while I love the Noughts and Crosses, I can't wait to read Boys Don't Cry. Who are you nominating?
Posted by Ali at 19:33