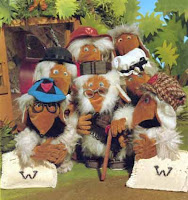 Elisabeth Beresford died on Christmas Eve. A prolific children's author, she was most famous as creator of The Wombles novels, which later became a BBC tv show. I had forgotten that she wrote a series of novels before she created The Wombles (apparently so named because her children were running on Wimbledon Common after a long car journey and her small daughter called it Wombledon Common), the Magic books, until I saw Neil Gaiman's comment on Twitter wondering why they weren't more popular. So I ordered some books from Amazon (second hand- sadly they're all out of print), and have been enjoying them. 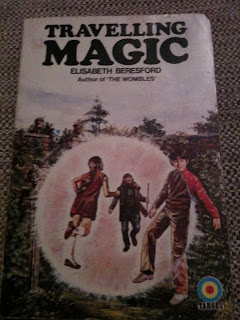 Travelling Magic was the first in the series, first published in 1965. My Target edition is from 1973, with lovely 1960s cross-hatched illustrations by Judith Valpy. It is the story of Marcus and Kate, who have to go to stay in a boarding house in a London suburb (I deduce that it is Wandsworth since it has the river Wandle flowing through it and a common) during a school holiday, possibly October half term although this isn't made explicit. Their mother is dead and their father has had to go to Istanbul for his work. Mrs Button, the landlady, and her daughter do their best to make the house welcoming for the children and their two other lodgers, Mr Snip and Mr Trevillick, but they and the area have come down in the world, and what was once a desirable area has become more and more urbanised- a block of flats is being built nearby, and a shared area at the back of the gardens has become a dumping ground. On their first night in the house, Marcus is awoken by a noise at his bedroom window- an owl is trying to get in. The children discover that he is a Latin-speaking owl, the guide of Mr Trevillick, who is a trainee magician from the 6th Century, who has travelled forward in time to gather information to present to the council so that he can join the Magician's Guild. He has received a travelling scholarship to study Housing, Travel and Food, with Horace the Owl to act as his guide. However, Horace has become too old, and far too grumpy, to be much use, so the children agree to help. Horace is a lovely example of an obstructive magic creature- he speaks Latin, and calls Marcus "simplicitus".

After adventures involving travelling through the wasteground at the back of the house (which is in fact a time-travel portal), travelling back to Mr Snip's youth, making him much happier and witnessing the statue of Boadicea (sic) on the Thames Embankment coming alive, Mr Trevillick casts a spell, making the Button's road a prime spot for redevelopment, enabling them and the old people from the Laurel's old people's home (where Mr Snip was about to move) to live more comfortably.

Awkward Magic is the second of the Magic books. 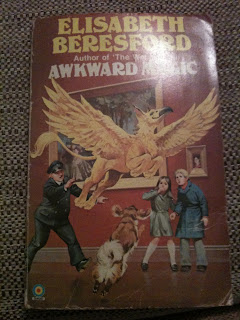 This is about Joe, a boy living with a foster mother in Brighton, since his mother is dead and his father is in the Army. On his way home from school for the summer holidays, he rescues what he thinks is a dog being hurt by two boys. It turns out to be a talking Griffin, travelled from the Ancient World to find a mysterious treasure that has been lost. Joe and his friend Grace assist the Griffin, whose magical powers enable them to have adventures, including finding and riding on a magic carpet. Along the way they make friends with Mr Wilkins, a washing machine salesman whose real passion is antiques, and it is through him that the unexpected treasure is found in the most unexpected place. Joe is well drawn, and he is a likeable boy. Beresford explicitly points out the development in his character as the story progresses- he has become much more self confident through his involvement in the Griffin's quest. Grace, however, is less well drawn. She conceals her real circumstances as a plot device, but this leaves her as a rather shadowy sidekick. Mrs Chatter, Joe's foster mother, jars rather for the 21st century reader- she reminds me of the comic char lady from a 1950s Ealing comedy, with her obsession with owning a washing machine and her enjoyment of watching the upper classes going in and out of the Regal Splendide Hotel.

The books have similarities- a light, comical touch, and the use of fantasy and magic is believable, as Beresford uses it to enhance everyday occurances rather than create extraordinary events. They are reminiscent of Edith Nesbit in this; for example The Story of the Amulet, where the juxtaposition of the Queen of Babylon with contemporary London is used to great comic effect. The character of the Griffin is reminiscent of the Psammead or the Phoenix from Nesbit's novels; he is vain and autocratic, and has great difficulty in understanding contemporary life. Both authors use parental absence to enable the children to have the freedom to pursue their adventures, and while magic causes them inconvenience or embarrassment, they are never in danger. Eventually magical agency allows the children what they really want: to be reunited with their parents.

I find it interesting that Beresford's novels are of fantasy in a distinctly urban environment; Travelling Magic in south west London, and Awkward Magic in a very clearly described Brighton. Joe and Mrs Chatter live in Kemp Town, the children visit the Brighton Museum, Royal Pavillion and the Lanes in the search for the lost treasure. There is a very funny scene in a department store. By contrast, Beresford's most well known contemporaries (for example Alan Garner, Susan Cooper, Lloyd Alexander) tended to set fantasy novels in the countryside or small towns. These novelists tend to have a mentoring adult to help the child protagonists in their quest- a Merlin figure. However, Kate, Marcus, Grace and Joe are the voice of reason, and the most knowledgable characters involved in the task or quest the magical character is involved in. Again this is reminiscent of Nesbit's comic fantasy, rather than the high fantasy genre that the other novelists espoused. 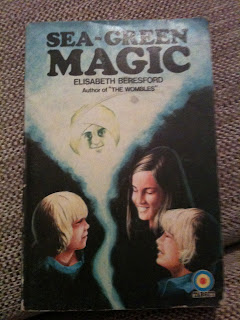 I have Sea Green Magic still to read. The blurb explains that it is the story of three children who find a djinn (genie) inside an old bottle, where it has been imprisoned for four hundred years. I fully expect it to be as enjoyable as the other two books. I would recommend these novels; they are great fun to read, and in my opinion although they are not completely successful (the endings in particular are a little anti-climactic) they stand up against other comic fantasies such as Helen Cresswell's Winklesea novels or Susan Cooper's The Boggart. Snap them up if you see them in a second hand bookshop, and enjoy them.
Posted by Ali at 10:13