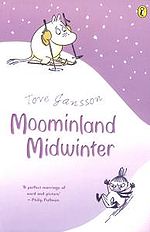 This year, it has been unusually snowy in London. Londoners are not equipped for snow, and indeed, we have had probably almost a decade without much snow, so we don't have snow ploughs or shovels ready to clear the snow away. I think we also have a quite unreasonable assumption that we don't really need to change our behaviour in any way because of weather; an attitude that Northern European or Scandanavian friends don't share. (We seem to assume that the rest of Europe does much better in snow than we do; but schools were closed in Germany the week before Christmas holidays; thousands were without electricity and public transport ground to a halt in Poland, both countries that regularly have far colder winters and heavier snow than South East England does).

We tend to marvel at the beauty of snow. Newspapers and social networking sites were full of photos showing how the most humdrum of landscapes can be changed by a snowfall; it is almost magical. However, it is also threatening, malevolent and alienating- after all, snow and ice can be deathly (as it is to The Squirrel with the Marvelous Tail in Moominland Midwinter), and the late sunrise, early sunset and lack of natural light can be depressing for some people. So in Finland, where much of the land is in the Arctic circle, the effect of no sunlight at all in the midwinter must be profoundly unsettling.

This is the premise of Moominland Midwinter by Swedish-speaking Finnish author Tove Jansson. Moominland Midwinter is the sixth book in the series. In it, Moomintroll wakes up in the middle of winter (Moominmamma, Moominpappa and the Snork Maiden are all still hibernating, as trolls should). Moomintroll is initially threatened by the snowy landscape- after all, his friends and family are mostly either asleep or, like Snufkin the poet-philospher-adventurer, have gone south for the summer. He is lonely and afraid, winding the clocks and setting them at different times for the companionable sounds. Throughout the story Moomintroll learns to not only survive and cope by himself, but also to look after the other inhabitants of Moomin Valley who are suffering in the cold. He does this with the help of the Too-Ticky, the indomitable fisherwoman, and with the example of Little My he even learns to enjoy some things about winter- for example, he learns to ski.

Moominland Midwinter has in my opinion been wrongly  characterised as cute, cosy or whimsical- perhaps because it was animated we think of it as being for small children. However, there is something uncanny and unsettling about much of the book. For example, the Ancestor and The Creature Under The Sink taking up residence in Moomintroll's house- their motivations and characters are still ambivilant at the end of the story. or when the squirrel is touched by the icy Grote and freezes. We meet another squirrel with a marvelous tail at the end of the book, but it is not clear if this is the same squirrel who survived or another one. Little My wants to take his tail as a muff. Moomintroll is very upset by the apparent death and is surprised that she isn't. "No," she says, "I can't. I'm always either glad or angry." What are we to make of this? It passes without comment, and Little My doesn't become more empathic during the course of the story. Little My is one of the worst offenders for purloining Moomintroll's family's belongings to help her enjoy the snow: Moominmamma's best silver tray as a sledge, for example, and she isn't punished for it. 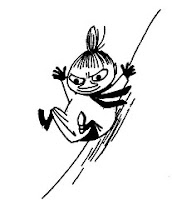 In the earlier books, the female characters were a little simplistic and stereotypical- the vain and silly Snork Maiden, and Moominmamma, the perfect mother, always cleaning and cooking and making everything better with coffee and pies. But I adore Little My- she reminds me of another Scandinavian heroine:
Pippi Longstocking, the strongest girl in the world.

Too-Ticky is another interesting female character. Tove Jansson has stated that she was based on her partner, Tuulikki Pietila, a graphic artist, who helped Jansson when she was overworked and depressed, and Too-Ticky's practicality, resourcefulness and ability to accept the Moominvalley inhabitants for what they are (for example, the flute-playing shrews who are so shy that they have become invisible) are invaluable to Moomintroll's family. She is a practical person: she fishes in the ice hole, and encourages Moomintroll to help the others; by doing so he becomes less fearful and starts to enjoy himself.

An odd aspect of the novel is the acceptance that sometimes life cannot be explained, and that there are not always pat answers to life's problems, but that that is one of the enjoyable things about it. For example, Sorry-oo the little dog who enjoys going out to howl with the wolves and fantasises about them coming to find him, knowing full well that if they do, he'll be wolf dinner. As Too-Ticky says, "All things are so very uncertain, and that's exactly what makes me feel reassured."

Bjork has recorded Comet Song for the forthcoming Moomin film. I think she captures the uncanniness of the stories beautifully.
Posted by Ali at 15:52