The Tao of Ged

Once there was a poor boy who was neglected by his family. Strange things started to happen around him, and he was taken in by a man with affinity with the natural world. His powers earned him a place at a school for wizards, a place of esoteric learning and strange rules, where he was teased and humiliated by a boy from a high born family. The boy was impetuous and hot tempered, and well aware of his poor home life, and as a result of using magic in an unauthorised way, called up a dreadful threat which only he could defeat. 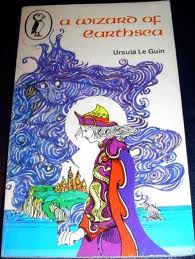 A Wizard Of Earthsea by Ursula K Le Guin was first published in the UK by Puffin books in 1971, as the rather psychadelic/ pre Raphaelite cover above suggests. This is the cover I remember as a child (I think this was my Mum's book; at any rate it didn't feature in my bedtime stories from my Dad. Maybe he thought it was too scary- but somehow had no compunction about reading the far more gory Hobbit!) I didn't read this as a child. I first read it a couple of years ago. It is a very different beast from the plot-driven fantasy of much popular modern children/ Young Adult fantasy such as Harry Potter, Artemis Fowl or the Lemony Snickett novels (and I don't mean this dismissively- these are all very enjoyable and often challenging reads). But Le Guin is writing in a different era, from a different stand point.

The novel was first published in 1968. This was an era of race riots, Black Power, Vietnam protests, USSR and China testing nuclear weapons, strikes and riots in Europe, hippies, "free love" and women's liberation. Ursula K Le Guin is a feminist, she is concerned with ecological issues and in Taoist philosophy, and these themes are often explored in her novels. Le Guin has stated that she feels that too often Science Fiction is about white men colonising space; she writes specifically from a feminist perspective in her later novels (see The Tombs of Atuan and Tehanu, the fantastically creepy sequels in the Earthsea novels). A huge innovation in her Earthsea novels is the diverse nature of her world; Ged and most other characters are described as having copper skin and black hair (although you wouldn't know it from the cover above or the recent television dramatisation.) Ged's friend Vetch is black. Le Guin drip-feeds this information about her characters throughout the first few chapters; a clever ruse given the year the novel was published in, and clearly sadly the producers of the television series didn't feel that staying true to Le Guin's vision would be popular either with viewers or with advertisers. See Le Guin's comments about this here.

I have stated that this novel is not plot driven, like much modern fantasy. Ged is on a quest, to defeat the evil that he releases due to his vanity and egotism. However, I believe that the novel’s key theme, the necessity for Ged to restore balance to Earthsea and thereby to learn moderation and self-control, are Taoist in origin. His growing maturity is demonstrated in his changing names: he is Duny as a child herding goats, then Sparrowhawk when he is with Ogion before going to school, but his true name is Ged, which must be guarded, for knowing a person’s true name gives the hearer power. (I know very little about American Indian beliefs, but Le Guin’s mother was an anthropologist who wrote a famous book about Ishi, a Yahi  man. I wonder if the idea of the power of names came from her mother’s research.) Ged must learn a dragon’s true name in order to gain power over it, and this section of the novel, where very little action occurs, but a great deal of character progression happens, can be related to the Taoist principle of inaction. Ged must learn to be in harmony with the universe.

A BBC audiodrama was recently repeated on BBC7. It is still available to listen again for a few days, and I strongly recommend it.