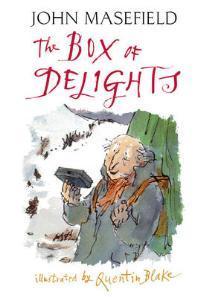 2010 is the 75th anniversary of a perennial Christmas favourite, The Box of Delights. It was first published in 1935, when author John Masefield was the Poet Laureate, as well as being a respected and popular novelist. (I have never read any of his novels, although I believe Sard Harker is still in print so I hope I'll get round to it some time...) The edition of The Box of Delights I have is Egmont, with colour illustrations by Quentin Blake, who was the first Children's Laureate, which seems appropriate. Blake chose The Box of Delights as one of his favourite children's books  in a poll of children's laureates to celebrate 10 years of the post.

The novel is the sequel to Masefield's 1927 children's novel, The Midnight Folk. In The Box of Delights, Kay Harker (the protagonist of both books) is now about 12, and is a public schoolboy. In the opening chapter he is on his way back from school for the Christmas holidays. He is going to Seekings, his home, and to Caroline Louisa, his governess. On the journey he is joined in his train carriage by a pair of shifty curates, who cheat him at a game of Hunt the Lady and whom he suspects of stealing his purse. He also meets an old Punch and Judy man, Cole Hawlings, and his dog, Barney. Cole gives him a mysterious message to pass on: "the Wolves are Running". At home, he learns that the Jones children are staying for the Christmas holiday- Peter, Jemima, Susan and surely one of the best girl characters in children's fiction, Maria: "I don't know where I've been," Maria said. "I've been scrobbled like a greenhorn. I knew what it would be, not taking a pistol. Well, I pity them if I ever get near them. They won't scrobble Maria Jones again."

Cole Hawlings is not just a Punch and Judy man. At Seekings, he does real magic for the children, and gives Kay his Box of Delights, with which he can go Swift, go Small or go into the past. Kay and the Jones children have some wonderful adventures, including rescuing Caroline Louisa, Cole and the clergy and choir of the Cathedral, who are being held to ransom by the burgling gang led by the wizard Abner Brown, now married to Kay's former governess Sylvia Daisy Pouncer (his adventures leading to their downfall are told in The Midnight Folk).

This is a wonderful book, to be read aloud a chapter a night to listeners in pyjamas drinking hot chocolate before bed, on the twelve days before Christmas Eve. I should think that anyone over 7 would love it. It doesn't matter if you haven't read The Midnight Folk, as the story stands alone. I have only one quibble- the "it was all a dream" ending. The Midnight Folk was content to have magic as the logic behind the talking toys, cats, foxes, witches and Kay's ancestors from the past helping him to find treasure. However, I still love this book, 35 years after my dad first read it to me. I've even ordered the DVD of the BBC series which readers of a certain age might remember, and I am hoping that it arrives before all the snow melts!
Posted by Ali at 09:45