I have been visiting a group of schools in Hackney this half term, supporting student teachers. Having a little time between appointments one day, I popped into the lovely Broadway Bookshop where I saw Catherine Johnson's Brave New Girl. 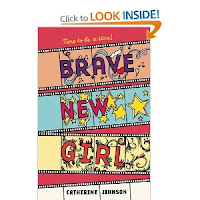 
Set in Hackney, this is the story of Seren Campbell Ali, her mum, dad, half brothers and sister in the near future: the run up to the London Olympics. 13 year old Seren in a loveable character, whose well meaning impetuosity gets her into scrapes. Her best friend Keith is making a short film to be shown in the Rio Cinema, Hackney, as part of the Olympics celebrations. The film is based on The Tempest, and Seren is to play the part of Miranda, whose island is the estate where Seren and Keith live (hence the title of the book, based on Shakespeare's phrase "this brave new world"). Seren is loyal and loving to her friends and family, leading her to embarrass her sister in front of the school heart throb, to falling out with a friend and having a humiliating photo of herself posted on a social networking site; will the film make everything right with her family and friends?

The characters and setting felt very real to me. Having taught for many years in North London, I was delighted to see a protagonist with Turkish heritage; as I have said before, it is very powerful as a reader to see yourself represented in your reading. The Hackney setting is well defined; travelling as I do by bus, I found myself spotting locations in the book, and trying to plot Seren's bus driver mum's route.

It is a very funny book, as well as being touching and warm. It would appeal I think not just to North East London readers, but to anyone who has been a sibling, a friend, a teenager... in short to everyone! I think that this would appeal most to 11+ readers. I loved it, and now have Catherine Johnson's A Nest of Vipers to read: this seems a very different book; it's a historical novel set in 18th Century London.
Posted by Ali at 18:41