Neil Gaiman quotes GK Chesterton at the beginning of  Coraline: "Fairy tales are more than true: not because they tell us that dragons are real, but because they tell us that dragons can be beaten". In Gaiman's books that I have been thinking this week, there are no dragons, but there are wolves, witches, murderous barons, a sinister mother, a giant, school bullies and a group of hired assassins- but he tells us that they can all be beaten- and in the main part, through intelligence and skill, rather than through the protagonists' special powers.

I first encountered Neil Gaiman through my dad. He and I have always bonded through books and reading, and while we have some difference of opinion, he first got me interested in speculative fiction, firstly through Lewis and Tolkein, then through Hitchiker's Guide To The Galaxy and Terry Pratchett. My dad passed on a copy of Good Omens, which Gaiman wrote in collaboration with Pratchett- I think either in the final year of my degree or shortly afterwards- and I still think it is one of the funniest books I have ever read.

A student introduced me last year to The Wolves in the Wall. This I find a very interesting book. It is beautifully illustrated by Dave McKean, and I find the typography very interesting too- at some points the words almost seem part of the illustrations. It is the story of a little girl, Lucy, who hears noises in the walls of her house. She knows that they are caused by wolves, but her family insists that there are mice, rats or bats causing the noise. Lucy is proved right when the wolves burst through the walls and take over the house- but she is also the one that comes up with the plan to take the house back. My student was confused by this book, because it is a picture book, which she associated with younger children. I would think that some young children may find it a little alarming- but of course, small children are the ones who are convinced that there are wolves in the wall, or bears under the bed, or (in my case) a gorilla at the end of the bed under the covers. Lucy is brave and sensible, confronts her fears and chases them away. 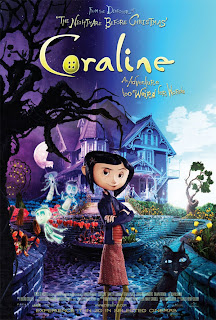 Coraline probably brought Gaiman to the attention of many people as a writer for children through the film adaptation. Coraline is a fascinating novel. I feel it demonstrates Neil Gaiman's respect for both the fairy tale tradition and the traditions of children's fantasy fiction, in particular Alice in Wonderland. Coraline and her parents move to an old house divided into flats. Her parents are to busy to pay her much attention. The other flats in the house are occupied by a strange old man (who turns out to be Mr Bobo, the trainer of a mouse circus) and Miss Spink and Miss Forcible, retired actresses who breed Yorkshire Terriers and call her Caroline. When exploring her new home, Coraline finds a door that opens into a mirror image of her home. There she finds another mother, who seems to be a doll, who seems at first to be sweet and attentive to her, but in fact cannot look after Coraline properly because she is unable to see beyond her own needs. She wants Coraline to stay with her forever, and to be her little girl. Coraline encounters some ghost children, who tell her that when the Other Mother became bored of them she ate them and imprisoned their souls. Coraline realises that the Other Mother cannot resist games and puzzles, so challenges her. Through her intelligence, with the help of a bossy cat, she tricks the mother, and escapes back to her real house and her real parents, and at the same time releases the souls of the ghost children.

What I found rather creepy about the book is that on the surface, Coraline's parents may appear to neglect her: they are busy working and can't amuse her when she wants to be amused, and that leads initially to her becoming trapped by the Other Mother. However, Gaiman seems to be telling us that indulgent parents are equally dangerous, particularly those who are unable to see beyond their own desires when it comes to their children. Coraline is safe at the end of the story, having learnt how to face things that are frightening, like murderous mothers and the first day of school, and she tells us "when you're scared and you still do it anyway, that's brave". I've always been a sucker for brave girls in fiction, and these two are wonderful. I'll write another post about Gaiman's Graveyard Book and it's inspiration, the Jungle Books, in a couple of weeks- I'm feeling a Christmas delve into seasonal reading coming on!
Posted by Ali at 19:40