"The finding is in me, and the finding finds a way".

This is now my third post concerning Russell Hoban, but I make no promises about no more! He is such a versatile and imaginative writer for both adults and children, and his books for children, as I have said before, are no less poetic and complex than his adult novels, and indeed contain many of the same tropes. 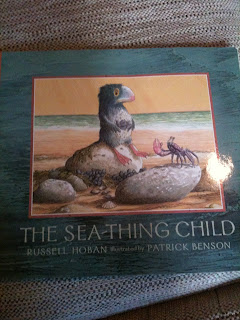 The title of this post comes from The Sea-Thing Child (1972), unknown to me until it was recommended by Marjorie from Paper Tigers
It was shortlisted for the Kate Greenaway Medal for Patrick Benson's illustrations, which work perfectly with the text. The story is of the sea-thing child's arrival on the beach as a "little draggled heap of fright", his interactions with other sea and beach-dwelling creatures and his growth and development until at last he is able to return to the life he was born to have.
The illustrations do exactly what they should in good picture books- they work both in tandem with and independently from the text, which is beautiful, poetic and thought provoking as you would expect a Hoban book to be. With each of the Child's interactions with the other creatures (a fiddler crab, an eel, an albatross) Benson's illustrations show that he is growing up, although Hoban does not explicitly state that he is doing this. This is a gorgeous book, and I thoroughly recommend it, perhaps to read to a child who has a lot of fears or anxieties about changing circumstances. It is quite long for a picture book, and has some fairly challenging vocabulary, so I would recommend it for 6+ as a book to read to children or 8+ as a book for children to read alone. Sadly it is out of print. 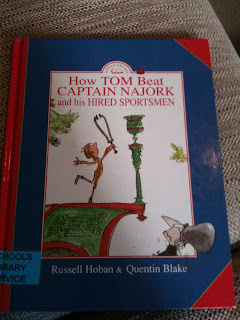 How Tom Beat Captain Najork and his Hired Sportsmen (1974) was absolutely one of my family's favourite books when my sisters and I were children. It is the riotously funny story of Tom, a boy who "liked to fool around". Sadly, Tom lived with his Aunt Fidget Wonkham-Strong, a lady who "took no nonsense from anyone. Where she walked the flowers drooped, and when she sang the trees all shivered", who has no truck with fooling around. She brings Captain Najork and his Hired Sportsmen to sort him out by beating him at the games womble, muck and sneedball. All these games prove to be organised forms of the fooling around that Tom does every day, and he wins all of them. Captain Najork however is consoled by Miss Fidget Wonkham-Strong, and Tom advertises for a new aunt.
Gloriously illustrated by Quentin Blake, this story doesn't have the rhymes and songs that are in The Sea-Thing Child and Bread and Jam for Frances (and his other children's books, and famously, Riddley Walker). However, the inventive use of language is everywhere- in character names (the aunt that Tom gets through advertising is Bundlejoy Cosysweet), names of the games and in the food Tom is given by Miss Fidget Wonkham-Strong: "eat your mutton and your cabbage-and-potato-sog", which entered our family lexicon. Again, sadly, this book is out of print; snap it up if you see it at a reasonable price, or maybe your library will have it.
Finally, another of my childhood favourites: 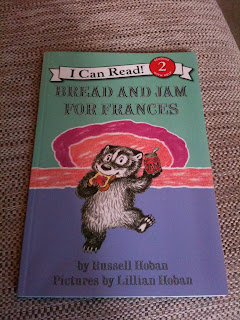 Bread and Jam for Frances (1964) is the story of an exhuberant little badger (there is a series) who decides that she doesn't want to eat anything but bread and jam. Apparently at the age of 3 or 4 I refused to eat anything but peanut butter and toast; I'm not sure whether my parents found this book around the same time. The Frances books are charmingly illustrated by Hoban's then-wife Lillian; Frances’ facial expressions and physicality are particularly enjoyable. Frances, in a move that many parents will recognise, decides that she doesn’t like eating anything except bread and jam, because she knows how it tastes, knows she likes it and therefore always gets what she likes to eat. Mother and Father Badger are wise parents and give into her, while talking about how delicious their breaded cutlets, spaghetti and meatballs and poached eggs are. Eventually Frances becomes tired of her bread and jam (and a little envious of her friend Albert’s exotic packed lunches) and eats up all her spaghetti and meatballs.
Hoban’s children’s books are remarkable for distilling the “truth” of the story to one sentence: from The Sea-Thing Child, the title of this post, which could almost be a line from Riddley Walker; from How Tom Beat Captain Najork and his Hired Sportsmen: “Maybe that will teach you not to fool around with a boy who knows how to fool around”. From Bread and Jam for Frances, it is “...I think it’s nice that there are all different kinds of lunches and breakfasts and dinners and snacks”.
Frances’ little rhymes and songs are a joy; in this book they are all about food; to an egg she sings:
I do not like the way you slide
I do not like your soft inside
I do not like your lots of ways
And I could do for many days
Without eggs.
Again, sadly, these books seem to be out of print, but they are classics in the USA. They’re readily available second hand, and I think children of 3 or 4 upwards would love them as much as I did.
Posted by Ali at 18:38