As a child, one of my favourite TV programmes was Jackanory. Incredibly, in the 1970s 15 minutes of primetime children's TV was not cartoons or drama, but an adult (often a respected actor) reading a story to children, supported with illustrations. One of my favourites was Bernard Cribbins reading Arabel's Raven by Joan Aiken, a prolific, gifted and witty author of novels and stories both for children and adults (Jane Austen fans, I suggest you investigate both her Austen novels and historical fiction; in Aiken captures Austen's detatchment and sardonic tone far better than the rather sugary sequels written by Emma Tennant; and fans of both Austen and zombies: this is just brilliant; almost as good as Jane Slayre). 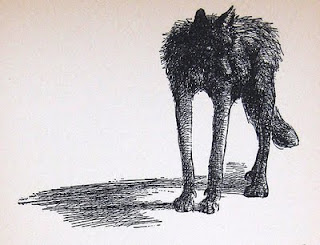 The Wolves series contains some of her best known work. The Wolves of Willoughby Chase was Aiken's first full length novel. Set in an imagined history where James II was not defeated in the Glorious Revolution of 1688, and the Stewart dynasty is still on the throne in the early 19th century. James III is on the throne, and Britain is threatened both by wolves who have migrated through the newly-opened Channel Tunnel and by rogue Hanoverians who want to establish "Bonnie Prince Georgie" on the throne.

This first novel introduces some characters that reoccur in later novels (Simon, Miss Slighcarp, Mr Grimshaw) but is very much a stand alone novel. I far prefer the novels featuring Dido Twite: Black Hearts in Battersea, Nightbirds on Nantucket, The Stolen Lake, The Cuckoo Tree and Dido and Pa. Dido is around 8 years old in the first novel: neglected by her appalling family, who it transpires are wicked Hanoverian revolutionaries, Simon (an art student lodging with the family) takes care of her, at first reluctantly, then with a certain amount of affection. Dido then rescues Simon, and as Aiken explains, she initially meant her to drown. However there were anguished letters from children, so she allowed Dido to be picked up by a whaler and taken to Nantucket, where she encounters Miss Slighcarp, the evil governess from the first novel.

Dido is a great child character, who becomes a protagonist in the later books. She has a difficult childhood and an interestingly ambiguous moral sense Black Hearts in Battersea, but develops into a resourceful, brave hero figure. As novelist and critic Amanda Craig explains in this BBC Radio 4 interview following Aiken's death, without Dido there would be no Lyra, and I would suggest, no Mosca. 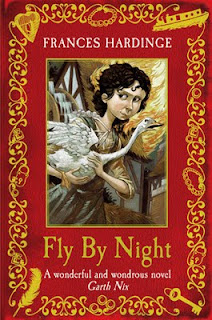 Mosca is the protagonist of the fantastically mysterious Frances Hardinge's Fly By Night. Set in an alternative historical period known as the Fractured Realm (which struck me as being 18th Century, imagining an England where after the Civil War the Republican Protectorate had not lasted, and the land is locked in an ongoing war between the monarchists and parliamentarians. In this struggle the Guilds have become the de facto power of the country, and the system of government is of city states nominally ruled over by their own Duke or Duchess, with their own patron "saints", the Beloved.

Mosca is the daughter of Quilliam Mye, a writer. She was born on the day of Goodman  Palptittle (the Beloved known as "He who keeps flies out of jam"). Names are very important in the Fractured Realm, as is propitiating the Beloved. She is an author brought up by her mill-owning aunt and uncle. At the time the books starts she is 12, and printed works that are not created by the Guild of Scriveners has been outlawed. All her father's books have been burnt, and perhaps because of this Mosca is drawn to interesting words. She is drawn to a verbose conman, Eponymous Clent, and after accidentally burning down her uncle's mill, rescues him from the stocks and escapes in the company of a vicious goose. Of course, she becomes embroiled with highwaymen, the Guild wars, spying and gun-smuggling.

Mosca is slightly older than Dido, and is another resourceful, brave heroine. Eponymous Clent is a very unreliable mentor figure, and the reader does not get the impression that she is ever truely safe. In comparison, Simon is a wholly good character and the reader feels that he will come to Dido's rescue until the end of Black Hearts in Battersea.

The use of alternative history is very interesting. There is a fascinating section on it through the amazing To The Best Of Our Knowledge programme via Wisconsin Public Radio (oh the joy of the internet!), where authors consider the internal logic of such histories- if one aspect of history is changed, how does it affect others? Hardinge's alternate history may seem far-fetched until one considers the city states of pre-late 19th Century Italy, the intrigues, assassinations, guilds and political alliances and marriages; and in early 19th Century there were incredible progresses in technology; balloon launches were a popular attractions and the first proposals for channel tunnels were indeed made during that era.

The delight of both of these books for me is not only the characters of Mosca and Dido and the fast paced adventurous plots, but also the inventive language both authors use, with elements of thieves' cant, Dickensian low-life characters and of course the authors' own inventiveness. The names are wonderful in both novels as well- again, with some of the joy of Dickens. All in all, both novels are highly recommended- Aiken's to 8 +, Hardinge's may need a reader with a little more stamina. I imagine that both would be a joy to read aloud- I've read The Wolves Of Willoughby Chase to 7 and 8 year olds who loved it. I'm really looking forward to reading the sequel to Fly By Night: Twilight Robbery (Fly Trap in the US).
Posted by Ali at 12:05