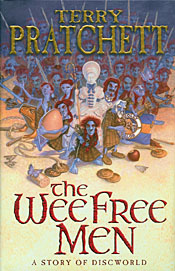 I have long been a fan of Terry Pratchett's Discworld novels. I think that as a fully realised alternate universe, it works brilliantly. Fantasy novels, particularly comic ones, must have their own internal logic, and the rules can be broken, but not so much that it breaks the reader's belief in it. Pratchett does this with incredible skill.

Longterm fans of Discworld will remember that in Discworld, according to Equal Rites, girls are witches and boys are wizards, and there are no exceptions. Boy wizards go to Ankh Morph to the Unseen University, and girl witches are apprenticed to another witch. Witch magic (despite the best efforts of Mrs Letice Earwig to "professionalise" it) is practical, focussing on healing, animal husbandry and looking after the sick, poor, elderly and unfortunate.

Tiffany Aching, in The Wee Free Men, first of her series, is nine years old. She lives on The Chalk, her family are sheep farmers and she is still mourning the death of Granny Aching, a formidable woman and well-respected shepherd. Tiffany is a very intelligent girl, largely ignored in her numerous family since she is capable and trustworthy. She is a very good dairymaid. She has read all the books her family have (a yearly almanac, a book of fairy tales, The Flowers of the Chalk, Diseases of Sheep and a dictionary which she has read from beginning to end since nobody told that this is not how a dictionary is used. Hence she has an excellent vocabulary but often pronounces words wrongly.)

The book of fairy tales came in handy, as she recognises Jenny Green Teeth and defeats her at the beginning of The Wee Free Men in a particularly ruthless way. This attracts the attention of both the Nac Mac Feegles, a gang of disreputable, vaguely Scottish "Pictsies" (thrown out of Fairyland for drunkenness, thieving and fighting), and Miss Perspicacia Tick, an itinerant witch finder (to recruit young witches) and teacher. Teachers in Discworld are like travelling showpeople- they turn up in a village, set up a showground and teach in return for food. However they are regularly chased from villages at dusk, for fear of chicken-stealing. Tiffany is too young at 9 to be apprenticed, but she travels to Fairyland to rescue her little brother Wentworth and on the way, also the Baron's son Roland, thereby also attracting the attention of Granny Weatherwax.

The four novels following Tiffany's adventures ( The Wee Free Men, A Hat Full Of Sky, Wintersmith and I Shall Wear Midnight) revisit her every two years: she is 11 in A Hat Full Of Sky, apprenticed to Miss Level and encountering some delightful other young witches, 13 in Wintersmith and 15 in I Shall Wear Midnight. One of the joys of Pratchett's novels are the names- to my mind he is on a par with Dickens in that respect. Annagramma Hawkin, Petulia Gristle, Dimity Hubbub and Gertruder Tiring are fabulous names. Another is the re-encountering of characters from other Discworld novels: Granny Weatherwax, Mrs Earwig, the Nac Mac Feegles and the Wintersmith are recurring characters. I would argue that rather than "adult" and "juvenile" novels, all Pratchett's novels can be enjoyed by all ages; readers who are more sophisticated and widely-read in the fantasy genre can enjoy the parody aspects, while less experienced readers enjoy the humour, characters and absurdities of Discworld.

Pratchett has a great deal of respect for his female characters, both young and old; Tiffany is a great female hero (not just an honorary boy as many female heroes in children's fiction tend to be), her thought processes are particularly interesting. What might be termed her "metacognition" (reflecting upon her thoughts, then reflecting upon her reflection) is particularly interesting and would be a fascinating basis for thinking skills lessons with 10-14 year olds. I find his commentary on fairy tales in The Wee Free Men interesting as well- the treatment of women considered witches in fairy tales, on The Chalk and in 17th century Europe and North America is a theme of the novels.

Finally, Pratchett brings aspects of both "high" and "low" culture  into the novels: part of Fairyland is a representation of Richard Dadd's The Fairy Feller's Master Stroke (minus a Nac Mac Feegle making an obscene gesture, of course!) which can be seen at Tate Britain. While searching for the Tate link, I came across this Queen song that I had never heard. One of my favourite exchanges in the novel, perhaps a comment on our present popular culture, is this one between Tiffany and Miss Tick:

There is now an illustrated version of The Wee Free Men, which I will be looking out for (my copy is a very bashed Random House copy). I'm a little concerned, as I have my own idea of Tiffany's (very ordinary) appearance, but the jacket looks great: 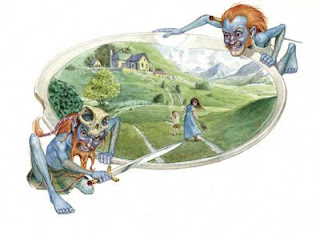 Terry Pratchett won the Carnegie Medal for The Amazing Maurice and his Educated Rodents. A full list of his children's fiction can be found here. His novels have frequently been dramatised on BBC Radio 4, and available as audiobooks (Mort is particularly good). One of the great things about these novels is that, in an era with increasing polarisation of the genders in publishers' marketing (I've written more about this here) is that they are enjoyed by both boys and girls; any upper Primary teacher will tell you how hard it is to interest boys in reading novels with a girl protagonist, but Pratchett can do it. I take my pointy hat off to him for that alone.
Posted by Ali at 11:01