Tomorrow is National Library Day, marking a year of protest against library closures. Interestingly enough children's borrowing from public libraries is growing, with Julia Donaldson's The Gruffalo as the most borrowed title for the second year in a row.

In order to celebrate libraries, I will be outlining my favourite fictional libraries. 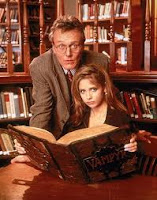 1. Sunnydale High library
As all Buffy fans know, Sunnydale High was built over the mouth of hell, hence why it is plagued by vampires and demons. Buffy's creator Joss Whedon is primarily a fan of fantasy and horror, and one of the joys of the series for me is his clever inversion of their tropes. In most horror series Buffy would be the girl at whom the viewer is shouting "No! call the police! Don't go to the cellar to investigate the strange noises!" instead of the vampire slayer. If the subtext of Buffy is that growing up, and specifically high school, is hell, then the library is the safe zone. Librarian Rupert Giles, the Watcher, keeps the Scooby gang safe, and shy, bookish Willow is frequently the character whose reading and discussion with Giles leads to discovery of the monster that Buffy is battling that week.

Image: oldkingdom.com.au
2. The Clayr's Library
Lirael is the second in Garth Nix's amazing Old Kingdom series. The Old Kingdom is separated from the New Kingdom by a wall, which I picture as a complete Hadrian's Wall. Lirael is growing up in the Old Kingdom. Her mother has abandoned her with her cousins, the Clayr, and she has never known her father. Lirael is pale, dark haired and brown eyed among the fair haired, tanned skinned Clayr, but her lack of identification goes beyond the way she looks: the Clayr women have the Sight, which generally awakens at the age of 11, although some develop it as young as seven. At the beginning of the novel, Lirael is fourteen and still hasn't developed it. Instead she is sent to be a Third Assistant Librarian in the Clayr library, housed deep inside the glacier on which the Clayr live. Inside it is housed an archive of both magical writings and objects, and in exploring these, Lirael begins to understand that maybe her destiny is very different from what she had imagined.

Image: en.wikipedia.org
3. The Unseen University library
I have written about Terry Pratchett several times in this blog, mostly about Tiffany Aching. This is not one of his children's novels, however, as Juliette from the wonderful Pop Classics has pointed out, many people do start reading these books in late childhood/ early adolescence. The witches arc is beyond doubt my favourite, and this is the first novel to feature them. As a baby, Eskarina (Esk) Smith (eighth child of an eighth child) is accidentally identified as a wizard. In Discworld, women can be witches and men can be wizards, and there is no possibility of Esk training as a wizard. Initially, Granny Weatherwax (after Tiffany, my favourite Discworld witch) tries to train Esk as a witch, but soon it is apparent that her powers are too strong, and they travel to Ankh-Morpork to enrol Esk at the Unseen University. Initially this doesn't go to plan, and it takes all of Granny Weatherwax's deviance to get her in. 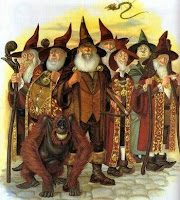 Image: wiki.lspace.org
The library at the Unseen University is fantastic. The Librarian, an orang utan, was once a wizard, wo can travel through time and space to collect and protect books that have yet to be written. Indeed, the Library occupies L-Space in time and space, so that it contains all books on magic from the past, present and future. The books are chained, not to protect the books from the students, but to protect the students from the books: books contain knowledge, knowledge is power, which (according to Physics) can be converted to energy and matter, which could distort time and space (I long for Terry Pratchett to write an episode of Doctor Who!). Esk and a young wizard called Simon unintentionally cause chaos in the library, travelling through a hole in space to the Dungeon Dimensions. I love Esk; sadly the only other Discworld book she has appeared in so far is the latest Tiffany Aching book, I Shall Wear Midnight., and only briefly.
4. Hogwarts Library 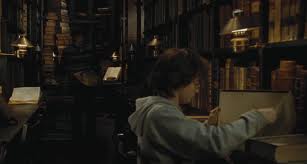 Image: harrypotter.wikia.com
I think that this is my ideal of a magical library. In my imagination it is a cross between the Bodleian (which features in several of Gillian Avery's children's novels, particularly those featuring Maria, the Warden's Niece) and University of London's Senate House library reading room. Hogwart's Library, housed on the third floor of Hogwart's Castle, has another great magical librarian, Madam Irma Pince, for whom JK Rowling has apologised, explaining that if she helped Harry, Hermione and Ron the way she should, there would be no adventures! One of the many reasons I love the Harry Potter novels so much is that the magical books in novels are so dangerous and exciting; they can bite, help or enchant, and the reader is never quite sure which. The library is a place of mystery and danger, where Harry, Ron and Hermione must often enter by stealth, sometimes wearing Harry's invisibility cloak, and Hermione's tearing a page out of a book in The Chamber of Secrets.
So here are four fantastic libraries. I would love to hear yours! Please comment and tell me.
Posted by Ali at 17:49