School's Out For Summer!

Even though I haven't taught children in school for nearly 10 years, I still get a distinctly end of term feeling at this time of year. Students are gone from my University campus (and they fondly believe that lecturers do nothing in the summer; I guess those module handbooks and reading lists just prepare themselves...) and although I am still at work, my reading has taken a summery turn. 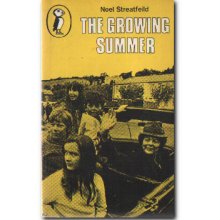 I was reminded recently of Noel Streatfeild's The Growing Summer (1966); one of her later books, it is the story of the Gareth children (Alex, Penny, Robin and Naomi). Interestingly, the children seem on the surface to have the standard middle class life: their mother gave up a career as a nurse to have them, the live in a road called Royal Crescent in a London suburb; Alex and Penny are diligent children at Secondary school, in sport as well as in academic lessons; Robin and Naomi are expected to be the same once they leave Junior school. However all is not what it seems. Mrs Gareth is a New Zealander who met their father, a research scientist (he is studying a microbe causing a rare disease) at the hospital where she worked. He has always had an urge to work abroad, but his parents in law wanted to know that if their daughter must live on the other side of the world, at least they could know where she is. So they bought a house for the young couple in a London suburb, and they settled down.

However, an opportunity comes up for him to work in the far east, and so he leaves the family behind for a year. At first, the older children relish the opportunity to get to know their mother better, but then their father becomes dangerously ill and she must go to him. It is nearly the end of school, so the children are sent to Ireland, to live with their father's eccentric Aunt Dymphna on the Cork coast, in an old house 12 miles from Bantry, called Reenmore.

Image: irelandwide.com.
Initially the children are both terrified and horrified at being given the wing of a house, access to the kitchen and told to look after themselves, with the help of Mrs O'Brien from the farm down the hill. This is a great book; there is a mysterious boy who appears with a tale of escaping from Communist spies (well, it was the 1960s), whose selfishness and expectation that someone will look after him gives them pause for thought; there is their growing understanding of their aunt, the wartime events that makes her cling to her home even though it is shabby and inconvenient, and eventually they grow in self sufficiency, tolerance and even enjoy Cork, the sunshine, playing on the beach and fishing.
One of the things I love about Noel Streatfeild's books is the way she can show the tensions and worries between adults, but is always on the side of the children. Obliquely she demonstrates that the trauma of losing everything in the War (her escape from occupied France, the loss of her brother and his wife- Mr Graham's parents) has affected Aunt Dymphna, and how his childhood has affected him, but this is only relevant in showing the growing maturity and empathy of the children, and we work it out ourselves; she doesn't tell us. Adding to the attractions of this book are Edward Ardizonne's illustrations. I strongly recommend that you investigate beyond Ballet Shoes- The Circus Is Coming (now called Circus Shoes- I blame Meg Ryan in You've Got Mail), Apple Bough and the Gemma books, an incredibly touching demonstration of what happens to a child star when she gets too old to play a little girl.
Sam Palmer and his family have just moved to the country. Sam is bored and fed up, missing his friends and the social life he had in the city. He has always been interested in insects, but now he has become hyper-aware of them, almost to the point of obsession. One summer Saturday he decides that instead of letting the insects follow him, he will follow them, and see where they are coming from. Little does he know that they are slipping between the fabric of our world and the connected world of Aurobon, where there is a fierce war on to stop General Hekken and the dictator Odoursin from destroying humanity in revenge for a terrible accident.
The Dreamwalker's Child by Steve Voake (2005) is a fast paced, exciting read, with an environmental message; if Artemis Fowl is Die Hard with fairies, then this is Rambo with pilot-controlled insects. Sam and Skipper, the daredevil girl insect pilot who rescues him from Hekken's prison-cum-insect breeding factory, are great protagonists, and the action sequences made me hold my breath. This is former Primary head teacher Voake's first novel, and I'll be certainly be hunting down others. Highly recommended for Artemis or Alex Ryder fans. 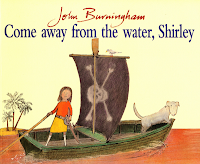 Come Away from the Water, Shirley by John Burningham﻿ (1977) is a classic picture book from the author of Mr Gumpy's Outing and Avocado Baby. It is one of my favourite books, as it is one where the story told in the pictures is far more complex than the story told in words, and contradicts much of what is written.
Shirley and her mum and dad go to the beach for a day. Mum and Dad have deckchairs, a packed lunch including a Thermos flask of tea, knitting and the paper. The text is simply Mum's monologue of instructions of Shirley not to get her shoes dirty with the tar that was all over 1970s British beaches, not to throw stones, not to touch a strange dog- while the illustrations show Shirley battling pirates, walking the plank, diving into the sea, landing on a desert island and finding buried treasure. Every class I have read this to (Nursery to Year 1) has loved it, and has always understood that it is a love poem to the imagination that can take something mundane and turn it into drama and adventure. Burningham is a very special writer, and if you have never encountered one of his books, I can't recommend them highly enough. Oi! Get Off Our Train is another of my favourites. 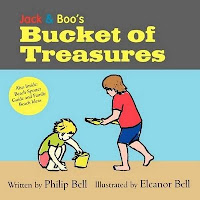 Jack and Boo's Bucket of Treasures, by Philip and Eleanor Bell (2010), is the story of two small children's day out at the beach, and the treasures that they find on the beach. The illustrations are interesting, being a blend of photographs and drawings of children (based on the Bell's own two children). The book would be great to take to the beach with small children, to read the story, do some of the beach activities suggested in the book, collect their own bucket of treasures and then use the spotter's guide to identify what they have found. Children who love writing may like to use printed out family holiday photos to create their own picture book of a day out with drawings of themselves and their families stuck on. I'll be passing this book on to my sister to give to my nephew (he's 3), who lives on the coast- I'm sure he'll love finding treasures on the beach to identify.﻿
I'd recommend The Growing Summer for 8+, The Dreamwalker's Child for 9+, Come Away From The Water, Shirley for 4+ and Jack and Boo's Bucket of Treasures for 3+. I heard this on the radio while writing this post: perfect indie summer music!
Posted by Ali at 18:57