A couple of months ago, I was watching Nanny McPhee,. I realised that while I knew the film was based on the Nurse Matilda stories of Christianna Brand I had never read them. I finally found a second hand copy of the collected tales, illustrated by her cousin Edward Ardizzone, and I read them with enormous enjoyment.

Of course, the film changes many of the details of the stories; Mr Brown is not a slightly hopeless, hardworking undertaker; instead there is an incredibly fecund Mr and Mrs Brown with an indeterminate number of incredibly naughty children. The Browns live in a large country house with a butler, cook and tweeny (Evangeline), and one of the most memorable pieces of naughtiness they get up to involves them going through the green baize door into the servants' domain, culminating in an almighty food fight in a pond, with Cook's wig as a major casualty. I particularly enjoyed the repetition of listing the naughtiness, and I can imagine children wriggling in vicarious delight. Some will be familiar to people who have watched the film (decapitating dolls, feigning measles, dressing animals in best clothes), although the outcome is quite different. The enigmatic Nurse Matilda, who arrives when children need but don't want her, but must go when they want but don't need her, is much the same, and it would be interesting to discuss with children whether she really does get less ugly as the children behave better, or do they grow to love her and therefore no longer see her blemishes?

Nurse Matilda is a great contrast to the original magical nanny, P. L. Travers' Mary Poppins. The Mary of the book is an altogether far more astringent character than Nurse Matilda (and bears little resemblence to the saccharine Disney version). Traver's Mary is vain, sharp tongued and clearly doesn't speak 1930's received pronunciation: "Strike me pink!" It's a hugely enjoyable re-read, and again, it would be an interesting subject of  discussion- it has been adapted numerous times, including similarities with Hindi film Thoda Pyaar Thoda Magic, where Geeta, the female lead, is like a cross between Maria Von Trapp and Mary Poppins. Graphic novel fans may remember Mary Poppins being in the Blazing World sequences from the League of Extraordinary Gentlemen (definitely not recommended for children!)

Interestingly in both books the magical nannies have had to come to help out the families because the badly-behaved children have driven away the former nannies. Mrs Brown fails to see that her children do anything wrong and has absolutely no authority over them; Mrs Banks in the first book has only recently had the twins and is rarely mentioned. The fathers seem to have no involvement with the children at all.

With nannies being less and less common for middle class families, there remains a problem of obtaining suitable childcare where one parent staying at home is an impossible dream. Who, then, steps in to look after the children? In  Granny Nothing by Catherine McPhail there is Sue, the  mean, reality TV obsessed nanny of the McAllister children (Stephanie, Ewen and Baby Thomas), whose parents are too busy to see that they are miserable. Then in the middle of a dark and stormy night Granny Nothing arrives, the mysterious mother of narrator Stephanie's father. 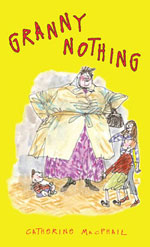 Mr McAllister is ashamed of his eccentric, fat, untidy mother, and initially only Thomas sees the good in her. However, as she helps the children deal with such threats as scary dogs and bullies, she wins over Stephanie, Ewen and their school friends, and ultimately is the conduit for Nanny Sue's downfall. While perhaps not magical, she certainly has special powers and is incredibly strong. According to Strident Publishing, the book was reissued due to popular demand from teachers, librarians and children, and I can quite see why: I read it on a train journey, and it is lucky my train could go no further without going into the sea, as I was enjoying it so much I would certainly have missed my stop!

Imagine a cross between Lemony Snicket's A Series of Unfortunate Events and Jane Eyre, and that would give you an idea of how engrossing and enjoyable the first book in  Maryrose Wood's The Incorrigible Children of Ashton Place series is. Miss Penelope Lumley is 15 years old, and having completed her studies at Agatha Swanburne's Academy for Poor Bright Females, she is summoned to an interview at Ashton Place, the home of Lord and Lady Ashton. She is expecting a rigorous interview, and is instead surprised to find Lady Constance begging her to stay. However, unline the young Browns or Banks, Alexander, Beowulf and Cassiopeia Incorrigible are not naughty; they were discovered in the forests surrounding Ashton Place, apparently raised by wolves and with an unfortunate fascination with squirrels. As many teachers have asked themselves, what does one do with a child who growls in public? Penelope does incredibly well until, at one of the most hilarious Christmas parties I have ever read about, events come to a head and the mystery is at least partially explained; of course, there is a sequel...

With the exception of The Incorrigibles, I would suggest that these books could be read with great pleasure to 6 years +, read alone from 7-8 years, depending on the child's confidence. I would read The Incorrigibles to 8 year olds, but I think the humour and sophistication would be best appreciated by 9 years + (and stolen by parents and older siblings!)
Posted by Ali at 19:12