Dance to the Music

This post is part of Playing By The Book's I'm Looking For A Book About... carnival. This month the theme is music. Please do go and check out the links on 15th October; there are always amazing recommendations from all over the world.

Writing a novel for children or young people based in popular culture is a fraught matter. Just look how quickly we've moved technologically in the past few years, and how that has influenced the way that popular culture is consumed and valued. Oddly, reading novels from the 60s and 70s can seem less odd than reading those from the 80s and 90s, with references to cassettes and videos.

Chartbreak by Gillian Cross is a case in point. First published in 1986, it is the story of Janis Finch, about to leave school, living with her mum and mum's boyfriend, fed up of school and of her life in Birmingham. After a row with the boyfriend, she runs out of the house in a temper and ends up at a cafe near the motorway. As she's eking out her coffee, avoiding going home, a group of young men come into the cafe, and sit near her. They are the band Kelp, and the charismatic but confrontational singer Christie provokes Janis into singing. Pretty soon she has run away from home to South London to join the band, and her identity as Finch is born. However, Christie's controlling nature and charisma both threatens and attracts Janis. Is it love or hate that she feels for him? and can she continue to assert herself in the face of it?

I loved this book, and despite the outdated references, and I think older children/ younger teenagers would too. Janis/ Finch is a great character, and the descriptions of the excitement and emotion that music creates both in listener and performer are really believable. I like the fact that Janis is emphatically not a pretty girl, but supremely talented, and as someone who has sung and hung out with bands, the portrayal of the band is believable. They are a hard working, up and coming band at the beginning of the book, playing awful support slots in grotty clubs, sound checking, setting up and taking down themselves, and it is Christie's drive and perfectionism, while frustrating, that gets them on the road to fame. 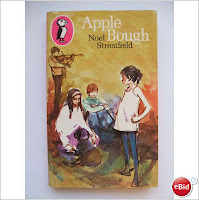 I have written about Noel Streatfeild's Ballet Shoes and The Growing Summer, but I think that Apple Bough (also known as Travelling Shoes- You've Got Mail has a lot to answer for!) is well worth revisiting. Three of the four Forum children are talented: Ethel as a dancer, Wolfgang as an actor and pop composer, but Sebastian is a very gifted violinist, and the family are touring the world with him. Myra, the oldest Forum child, is not talented, but is a loving sister and an ally of Miss Popple, the governess hired to teach them, since Sebastian's music career means that he can't go to school. When Ettie and Wolf decide that the time has come for them to assert themselves and pursue their own talents, it is Myra who finds a way for them to stay in London instead of travelling with Sebastian and their parents, who are totally oblivious that the children have tired of touring. Myra's love of their old house, Apple Bough, is eventually the inspiration for the family to find a permanent home.

Noel Streatfeild was an actress before she became a novelist, and I think that she portrays the realities of a career in performance for children very well: the hard work and dedication, but also the boredom, waiting around and sacrifices needed. The reader is often told that Sebastian is not considered a child by the other musicians he works with while playing, but outside music he is, if anything, quite young for his age.

Streatfeild fans will be glad to know that Madame Fidolia, the head teacher of the stage school attended by Pauline, Petrova and Posy Fossil, appears in this novel.

Sadly both books are out of print, but are readily available from online stores. Chartbreak is most suited to children 11+, and Apple Bough for 8+.

The title of this post comes from Sly and the Family Stone's Dance to the Music, a song which perfectly expresses the joy of listening to music!
Posted by Ali at 20:52

Email ThisBlogThis!Share to TwitterShare to FacebookShare to Pinterest
Labels: Gillian Cross, I'm looking for a book about..., music, Noel Streatfeild