Pirates and smugglers and ghosts, oh my! 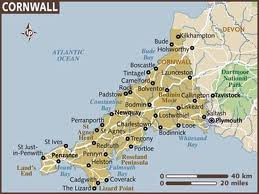 This post will be part of Playing By The Book's blog carnival I'm Looking For A Book About... on seaside and all things beachy. Please do go and check out the others!

I think if I was to do any kind of proper analysis, Cornwall and the West Country in general would feature very highly as a setting for children's fiction. From two of Susan Cooper's The Dark is Rising series to Enid Blyton's Famous Five, the combination of mythology, wild landscape, sea, caves and lawless history has been an irresistible combination for authors. And for adults, Daphne du Maurier's novels, such as My Cousin Rachel, Rebecca and Jamaica Inn, evoke the history and landscape of Cornwall very powerfully. 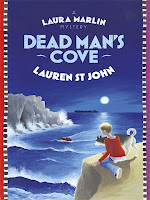 Dead Man's Cove by Lauren St John is a wonderful mystery adventure story, in the tradition of Malcolm Saville, but it is thoroughly up to date. 11 year old Laura Marlin is an orphan, living in a children's home, when she learns that she has an uncle and she will be going to live with him. She arrives at his house in Cornwall in the middle of the night, and finds him oddly relaxed about her care. All she is told is that she must not go to Dead Man's Cove. However, Laura's hero is Matt Walker, a detective in a series of novels, and various events have piqued her curiosity: where does her uncle, Calvin Redfern, go in the middle of the night? Why is the housekeeper so interested in him? And what is the secret connected to the strange, silent boy Tariq, nephew of the owners of the North Star Grocery? Laura, accompanied by her trusty three-legged husky, must find out.

This is a really wonderful book. The atmosphere of a Cornish seaside town out of season is wonderfully conveyed, and the geography and geology of the place are integral to the plot. I loved the way that the romantic past of smugglers is undercut by the modern realities of criminal gangs. Fabulous, and I can't wait to read the next book.

Venus Rocks by Fiona Dunbar is the third in the Kitty Slade series; I reviewed the second, Fire and Roses, here. Kitty lives with her grandmother and brother and sister, Sam and Flossie. They are home schooled, following incidents at Kitty's school in the first novel, Divine Freaks, where Kitty discovered her rare condition, Phantorama- the ability to see and communicate with ghosts. Being home schooled means that the family are able to spend a lot of time travelling in their camper van, the Hippo. In this novel the family are in Pelporth (based on Polperro, Fowey and Port Isaac), staying with their Aunt Phoebe, Uncle Sean and cousins Ty and Ashley. So far, Kitty has seen only solitary ghosts, but here in Pelporth she sees not only a whole ghost ship, but also a very persistent ghost girl, who Kitty discovers is Beth, who disguised herself as a cabin boy to stow away, follow her lover Jed and escape her brutal father.

The Venus has a gruesome reputation: people who see it die soon afterwards. Kitty must solve the mystery of the ship (who it turns out was not simply a merchantman, but a privateer, a government-sponsored pirate ship), reunite Beth the ghost girl with her lost love and also deal with some present-day nefarious goings on, which threatens to involve Ashley's former friend Megan.

The Cornish atmosphere, landscape, folklore and history again permeates the book, and is integral to the plot. Readers will learn a good deal about tides, caves, marine biology and geography from reading both books; any upper KS2 (8-11 year olds) studying Cornwall as a contrasting location in Geography, or indeed visiting Cornwall on holiday would enhance their learning from these books. However, they are both fantastic reads and I would recommend them! Dead Man's Cove for 9+, Venus Rocks for 10+. Happy reading!