A reminder: the Ash Mistry and the Savage Fortress giveaway ends on 19th March!

I am a cat lover. My family has always had cats, and I have a lovely, rather elderly cat called Spike. 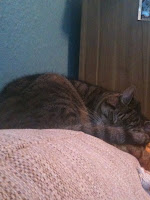 Here he is doing what he does best: sleeping on the back of the sofa.

Recently I have read three books about cats. I briefly met Tom McLaughlin at the Big Green Bookshop where he was doing an event for the children. A group of small children were waiting with rapt attention for him, so I got hold of a signed copy of The Diabolical Mr Tiddles. It is wonderful. 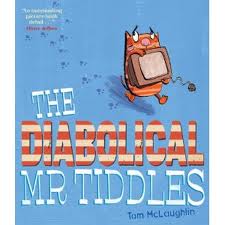 Image: amazon.co.uk
Harry longs for a cat, and when he finally gets his heart's desire, he names his new friend Mr Tiddles. He loves his pet and pampers him, giving him delicious food, attending to his comfort and entertaining him. Mr Tiddles wants to repay Harry's care, so starts bringing him increasingly extravagant presents, including cake, a train set, a rock star guitar, a grand piano and finally a horse! Harry becomes suspicious, and follows Mr Tiddles through the town. I can imagine the double page illustration of the town with Mr Tiddles' route in a dotted red line being a favourite with young readers. The route takes in a museum, a space centre and even a Western ranch! - which begins to give us a clue where these presents come from... And we finally catch up with Mr Tiddles outside a very important building, where an important person helps to resolve the story. I urge you to make sure you look at the end paper of this lovely picture book; it really made me giggle. The illustrations are incredibly detailed, with a lovely old fashioned cartoon quality without being grotesque. Highly recommended for 3+. 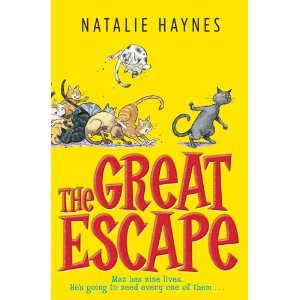 Image: amazon.co.uk
Comedian Natalie Haynes' first novel for children, The Great Escape, will not be her last I hope. 12 year old Millie is rather fed up. Her dad has just lost his job as a computer programmer, and is helping his friend out with his window cleaning business. Millie goes along with them to wash the windows of a laboratory to avoid being looked after by a nosy neighbour, and is astonished to see a cat escaping from the lab. She is even more astonished when the cat talks to her. It appears that the lab has been fitting the cats with voice boxes, and Millie, her friend Jake and his pre-teen hacker brother Ben must carry out the detective work to find out why, stop the testing and rescue the cats. Max the cat is suitably sardonic, and the book is very funny. While Natalie Haynes clearly has strong opinions about animal testing (the book won an award from animal rights charity PETA) this is not a polemic, but a witty, exciting adventure mystery. It would be a great read for 9+. This book does seem to be out of print, but is widely available from online stores.


I don't think I have ever had as many positive tweets about a book as I have about Barbara Sleigh's Carbonel. First published in 1955, it is the story of Rosemary, who lives with her widowed mother in a boarding house. They don't have much money, and Rosemary's mother supplements her pension by taking in sewing. During the summer holidays, while her mother is sewing at the house of the wealthy Mrs Pendlebury Parker, Rosemary decides to set herself up as a cleaner to help out financially.  Because she knows she won't be able to take one out of the house, she buys a broom from an untidy looking woman in a market. She buys a cat from the same woman, and is shocked to discover that not only is he a talking cat, but the Prince of Cats, enchanted by the untidy woman- Mrs Cantrip, a witch. Rosemary has broken part of the enchantment, but not all of it, and she and Mrs Pendlebury Parker's nephew, John, set out to break it.

This is still a great read. Part of the joy of the book is the freedom that 1950s children had: Rosemary and John buy and cook sausages on a gas ring and take the bus to a local cathedral town to find Mrs Cantrip's cauldron, as well as other unsupervised adventures. Sleigh's descriptions are also a joy; she describes Rosemary's plaits as flapping like "the blades of an old pair of scissors" as she hops up the kerb. As @mokuska reminded me, Carbonel is in the great tradition of grumpy magical helpers, like E. Nesbit's Psammead, and he reminded me of the magical characters of another favourite mid-20th century children's fantasy writers, Elisabeth Beresford. I wrote about her here.

This novel was followed by two more about Carbonel: The Kingdom of Carbonel and Carbonel and Calidor. Sadly they seem to be out of print but are listed at a reasonable price in the usual online shops. I have read Carbonel aloud to children of 7+, and confident readers of that age and above would enjoy reading it themselves.