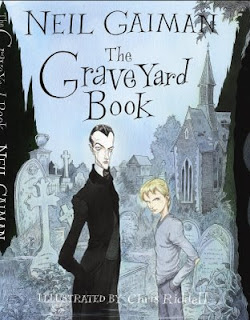 When you first saw the book, what did you think it was going to be like?

When I first picked the book up I thought it would be quite scary by the title and the picture of Bod and Silas in the graveyard. Also when I went to Waterstones to buy it, the cashier at the desk told me that I would really enjoy it so that made me want to read it even more, and now I want to read it again!

Was there anything you liked about this book?

Yes, there were quite a few things I really liked such as, when Bod leaves the graveyard and when Scarlett and Bod go though the trouble of the sleer. The reason I enjoyed these bits was because of the description ;it really helped me paint a picture in my head.

Was there anything you disliked?

Yes, I didn’t really like the bit about the dance that only alive people and dead people can dance; it didn’t really excite me much.

Was there anything that puzzled you?

Yes, the thing that really puzzled me was Silas, my dad and I thought that maybe Silas was a vampire because he had no reflection, he lives in the dark and he isn’t dead or alive

Were there any puzzles - any connections that you noticed?

Yes, when I read The Graveyard book I thought that some bits were a bit like Coraline although I have only seen the film and also I thought the beginning was also like Anthony Horowitz’s “Horowitz Horror.”

If the author asked you what could be improved in the story, what would you say?

I can’t really think of anything that could be improved. In fact I think it is so perfect that I chose to go to school on world book day as Silas. I have already recommended it to my friends.