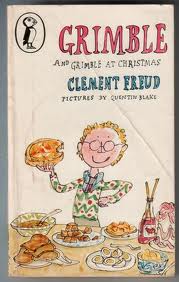 Image: childrensbookshop.com
Sir Clement Freud, chef, theatre impressario (he launched the Royal Court Theatre Club, a cabaret club, which later became the Royal Court Theatre in Sloane Square, London), journalist, Liberal MP, TV and radio personality and raconteur, wrote two short children's books; Grimble and Grimble at Christmas. Richard wrote about Grimble in his guest post here; and I will write about the very funny second story today.
Grimble's parents are very vague (they forgot to give him a first name, they're not sure when his birthday is, so he is "about 10", and will often forget to tell him they're going away, so he has to look after himself), and in this story he is convinced that they have forgotten about Christmas. Grimble plots to make enough money so that he can buy presents, a tree and, most importantly, Christmas dinner for himself and his family. Grimble sets himself up in a toast-making and delivering business, delivers Christmas trees and is even sent a pound note by his aunt (Grimble at Christmas was published in 1974!), but just when all seems lost, he receives a wonderful Christmas surprise from an unexpected source.
I first encountered this book 20 years ago, as an adult. It was a childhood favourite of a friend of my sisters, who gave it to her. This is very definitely a much-loved second hand copy; priced 10p, it is very creased and the pages are yellowed. Children's books very often migrate to my bookshelves from my family's, and I read it, giggling. This is a very funny book, with Freud's dry wit and love of food evident on every page. It is only 5 chapters long, and would be a wonderful book to read to children 7+ in the run-up to Christmas. Children 8+ would enjoy reading it themselves, but may need prices of items explained (for example, a loaf costing 6p!)
Posted by Ali at 14:33