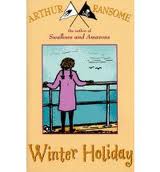 I loved the Swallows and Amazons series of books as a child. The Swallows (John, Susan, Titty and Roger) and Amazons (Ruth- known as Nancy- and Peggy) are the protagonists of the first two books, Swallows and Amazons and Swallowdale, are middle-class children who attend boarding school, and the books are the stories of their summer holidays in the Lake District. Their adventures sailing on the lake and on the fells are sanctioned by Nancy and Peggy's mother, Mrs Blackett, and the Swallows' mother Mrs Walker is reassured by the famously sanguine telegram from Captain Walker, the children's father- BETTER DROWNED THAN DUFFERS IF NOT DUFFERS WONT DROWN. The children are initially at war with, then aided and abetted by, the Amazon's Uncle Jim, known by the children as Captain Flint, since they spent Swallows and Amazons being pirates.
The fourth novel in the chronology of books, though the third set on a lake inspired by Coniston Water, it is the first appearance of the D's, Dick and Dorothea Callum, who are spending the last week of their Christmas holiday on Dixon's farm. Mrs Dixon was their mother's nanny. The children's parents are going abroad on their father's first foreign posting. The children have no experience of sailing, but are experienced skaters; Dick's main interest is in Science and at the point the story opens, he is involved with astronomy. Dorothea is extremely imaginative, a keen reader and storywriter (though in a less irritating way than the unfortunately-named Titty). They become friends with the Swallows and Amazons, making an igloo from an abandoned hut, cooking out of doors and skating on the beck. The children know that a great freeze is forecast; they are re-imagining the landscape as Polar explorers and lament the fact that they will be returning to school before it comes.
A reprieve from return to school comes when Nancy develops mumps. Since the children must remain in quarantine for a month to ensure that they are free from infection before returning to school, Peggy moves to Holly Hawe farm with the Swallows (Mrs Walker and baby Brigit is in Malta with their naval Captain father) and they invent ways to communicate with Nancy via coded pictures and symbols on flags. On a trip to High Greenland (a snow covered fell) they find a sheep nearly dying, trapped on a narrow ridge. Dick (using his knowledge of gravity and pulleys) rescues it with help from Titty, Roger and Dorothea, and in gratitude Mr Dixon and Silas, his shepherd, makes them a sledge. He becomes very involved in their exploits, giving them sheepskins and rabbit skins to make hats and mittens with. The final adventure of the story, when the less knowledgeable Ds misread a signal from Nancy and set off alone in a snow blizzard, is truly thrilling. It is also gratifying for more bookish readers that Dorothea's romantic, storytelling feeling of what is fitting for explorers to do leads to their rescue.
This is a wonderful seasonal re-read. The wintry landscape is well evoked, it's beauties and dangers are evident. Many 1930s children's stories make the contemporary reader cringe (witness @knownasbowman's tweeting his reading of Biggles novels), but I was relieved that this wasn't the case with Winter Holiday. The children are middle class and attend boarding school, but Ransome portrays the Dixons, Silas and the other Cumbrian people, and their dialects, that the children encounter with respect. In particular I enjoyed the way that Mr Dixon and Silas enters into the polar explorer spirit with the Ds, so that they can join in the exploration on equal terms. A few years ago papers on Ransome's time in Russia reporting for the radical Daily News on the revolution and the Bolshevik government were released. MI5 considered his reports unduly sympathetic, although his politics remain unclear. However if he did have left wing sympathies it may explain this book's freedom from contemporary class prejudice (though I remember some condescending attitudes in Coot Club- perhaps more recent re-readers can enlighten me?). All in all, curl up with this book if you are 9+ and enjoy with hot chocolate, looking through the window at the cold outside. I think it would be a great read-aloud to 7+ as well.
Posted by Ali at 10:20