I feel slightly uncomfortable with the concept of "boys' books" and "girls' books". Now that marketing is such a huge part of the publishing world, it seems to me that there is a preponderance of texts aimed at girls (pink covers with pictures of cheerleaders, puppies or romantic vampires, depending on the age range- something else I'm uncomfortable with) or boys (blue, black or green covers featuring dinosaurs, footballers or gory vampires). The Boys into Books project (part of the 2008 Year of Reading) lists books that may be popular with boys- and lo and behold, they are in general simply good and exciting books that any reader would enjoy. 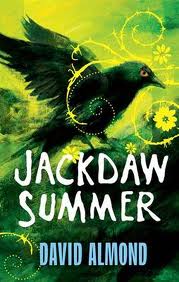 The cover of Jackdaw Summer (2008) by David Almond, whose Skellig I wrote about here, is a case in point.  The protagonist, and narrator, 14 year old Liam Lynch, is stranded between childhood and adolescence. His best friend, Max, is maturing: he has a girlfriend and is considering his future career, while Liam still fantasises about death and killing, and glories in dirt and savagery.

At the beginning of the novel the boys are walking in the countryside near their village in Northumbria. Max, who was born and brought up in the village, spots a jackdaw, and tells Liam of the theory that they can be imprinted by humans, if they see the human before they see their mother. They follow the jackdaw into a ruined building, where they find a recently abandoned baby.

The novel turned my expectations on their heads. This is not the search for the baby's identity and parentage that I expected- although Liam's dad creates his own narrative around it. The novel explores the violence and savagery that Almond seems to be suggesting is a part of the human condition. Liam's dad is anti-Iraq war; as the planes from the local army base fly overhead, he shouts that they should go and bomb Blair. His mother photographs the scabs, scars and bruises left by the untamed play of his last boyhood summer.  Liam's former friend Graham Natress is staging and filming mock executions. The village was formerly the home of the Reivers, involved in centuries of guerilla warfare between Scotland and England before James 1's accession to the throne united the countries. Violence is deep in the history of the place.

Into this environment comes Crystal, a self harming foster child, and Oliver, a refugee boy from Liberia, both of whom are troubled by their own violent pasts and imprinted, like the jackdaw, by their early childhood experiences. At the end of the unusually hot summer, modern warfare, Nattress' fascination with torture and executions, Oliver's childhood experiences in Liberia and Liam's own fascination with warfare, knives and violence all come together in the novel's denouement.

Like Skellig, the prose is lyrical, beautiful and deceptively simple. This is not the gadget- heavy, thrills and spills book that many publishers think boys want, and it lacks the fantastical element of Skellig, but I think it is a powerful and magical read.

Recording and images of jackdaws can be found at the RSPB website, and the School Library Association has pulled together information on boys and reading here.
Posted by Ali at 15:24