Last year I watched the BBC TV film Lost Christmas with Eddie Izzard. You can see the trailer here. I found it an incredibly moving and very beautiful film, so I was excited to see that one of the writers, David Logan, has adapted it into a novel. 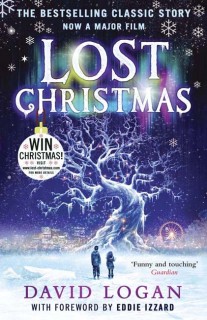 10 year old Goose wakes up one Christmas Eve to the sound of a puppy barking. He runs downstairs to find his parents unsuccessfully trying to hide a mongrel puppy. Goose is full of plans to play with him, but then his firefighter dad receives a call and has to go to work. Disappointed, Goose hides his car keys. Of course, that doesn't stop his father from going to work; instead his mum gives him a lift in her car. Goose's spur-of-the-moment act means that he loses both parents in a car crash.

A year later he is living with his grandmother, who is in the early stages of dementia. He still has Mutt, his dog, but he has lost everything else, including his ability to feel. He is also involved in crime, stealing and handing over the objects to his dad's former best friend, Frank, whose wife left him when Frank's grief led him to drink heavily.

Then after a heavy night in a pub, Frank meets a strange man, Anthony. Anthony seems to have lost his memory. However, he seems to have a strange power, to "read" people and know their secret- and not so secret- losses. As Goose and Frank become more involved with Anthony, he helps them to make amends and return lost things to their owners.

This book deserves to become a Christmas classic. I think it is probably aimed at 10+, but I think it could be a fantastic book for a family to enjoy together, with an adult reading it to children 8+ and helping them understand allusions, to, for example, Oscar Wilde's The Happy Prince.

I wish you all a Happy Christmas, and hope that you enjoy some wonderful Seasonal Reading too!
Posted by Ali at 07:30