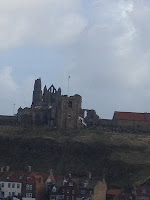 Last weekend I braved the five hour journey on three trains to visit Whitby for a few days. Of course, the town is where Count Dracula first sets foot on British soil, but there are plenty of local stories of witches, ghosts and other spooky goings on. It was the perfect place to spend time leading up to Hallowe'en.

While I was in Whitby, I read the second in the Whitby Witches trilogy, A Warlock in Whitby. I'll be writing about the first book shortly. It was great fun to read the book where it was set, almost at the same time of year: the book is set just before Bonfire Night (5th November).

Jennet and Ben are happily living with Miss Boston, who is fostering them. However, she gets called away to visit a sick friend in London, and Miss Werther, from the post office, is looking after the children. Ben has second sight, and local children find him a bit weird. Because of this, he is being bullied.

Following the events of the previous book, a mysterious stranger, Nathaniel Crozier, arrives in Whitby. He has a knack of getting himself invited into houses, and when there, can influence the inhabitants. Jennet- and many of the other women- fall for his charm, and will do anything for him. However, he is the Warlock of the title, and is in Whitby both for revenge and to awaken an ancient evil.

For me, this book didn't entirely work. There are three strands to the plot: Nathaniel Crozier in Whitby, Nelda the Aufwader (a race of Fisher Folk who live in the caves under the cliffs, who only Ben can see) and her need to atone for events in the first book, and Miss Boston in London, and for me, the three didn't entirely hang together. I was also disappointed with the extent to which Jennet was sidelined in the book; I would have liked her to have been far more instrumental to the plot.

However, the mystery and menace of Whitby is well evoked. A particularly scary moment takes place in St Mary's Church on East Cliff, near the Abbey ruins. Here is a gravestone, damaged by salt spray and wind: 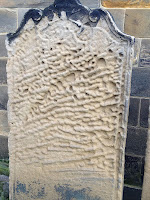 And I wondered whether this was where Miss Boston and the children lived: 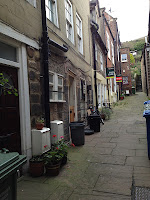 I would say that this book is appropriate for 9+. I think that it would be best to read The Whitby Witches first, though.