Earlier this month, I went to Lake Garda in northern Italy on holiday. The friends I went with are keen climbers, mountain bikers and kayakers, and unfortunately I have a shoulder and back problem which means that the most strenuous activities I could do were walking and swimming in the pool. However, this enabled me to do some reading while they were off being active! 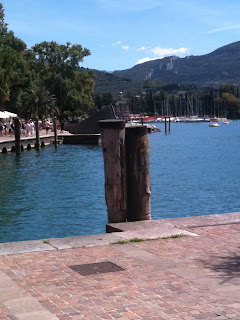 The Knife of Never Letting Go by Patrick Ness was the choice of the children at the book club I hope to run, and I must say I was a little nervous when I first started reading it, since although the club is for 8-12 year olds, most of the members are 8-10. Todd Hewitt is about to turn 13, and in his world, he will become a man. Todd belongs to a pioneering community of settlers on another planet, and like the Pilgrim Fathers, the original settlers were escaping what they perceive as a a sinful world. Todd grows up in Prentisstown, totally inhabited by men. He has been told that germ warfare released by the indigenous people of New World planet (the Spackles) killed all women, including his mother, but the only side effect it had on men was making all their thoughts audible. Todd appears to be growing up in a world with no secrets. Even dogs and men can read each others' thoughts.

﻿
﻿ Then, in the swamp, Todd encounters a pocket of silence. Living in a world of constant noise from others' thoughts- really well depicted in the book as overlaying sentences of text- this is a new experience for him, and unfortunately not one he can keep secret: Mayor Prentiss uses thoughts as a way to control his population. He also encounters the preacher, Aaron, who attempts to provoke a fight with him. On returning home, his foster fathers Ben and Cillian realise what has happened and perceive the danger Todd is in. They have been planning Todd's flight for 11 years. They give him Cillian's hunting knife, Todd's mother's diary, a map and a bag of supplies, and Todd and his dog, Manchee, must escape. However, Todd cannot read: Mayor Prentiss has banned books and shut down the school, so Todd discovers only by degrees that everything he has known about his world is a lie.

This is an amazing book, which reminded me in many ways of Russell Hoban's Riddley Walker, particularly in the narrative voice and in premature adulthood thrust upon Todd. I was a little alarmed that the bookclub would find it too violent, and that the (very mild) references to sex might be too much for them, but I needn't have worried: these aspects seem to have passed them by. They found the death of one of the characters more upsetting (and I won't spoil it by saying who). One boy in fact carried the book around for days, even reading it at playtime at school!

The second book was Nnedi Okorafor's The Shadow Speaker. Set partly in Niger in 2070 and partly on Ginen, the planet where Okorafor's earlier work Zahrah the Windseeker is set. Post-nuclear event, the portal between the world of Ginan and Earth has opened, and there are metahumans, such as Ejimafor who can speak to shadows. Her father was a local politician, who imposed a strict interpretation of Islam on Ejii's town. He enforced veiling for women, and took other wives, before throwing Ejii and her mother out. Hypocritically, however, he still had Ejii sitting on the platform at a political rally when the ruler of Ejii's state, Jaa (who is from Ginen) arrives and beheads him. Ejii hated her father, but still feels both attracted to and repelled by Jaa. However, when she arrives at Ejii's house with news that the inhabitants of Ginen intend to attack rather than have the corruption and pollution of Earth damage their planet, Ejii is determined to go with Jaa and help. Her mother forbids her to leave, so she sneaks off in the night with Onion, her talking camel. On the way she encounters talking desert cats, murderous sentient sandstorms and a boy who was sold into slavery in a cocoa plantation by his own family, who has powers of his own.

This is a good book, but not a great one; it is interesting to see how much better Akata Witch is, where Okorafor appears to be keeping her imagination a little more under control, leading to a much more coherent narrative in my opinion. However, a less-good book by an amazing writer like Okorafor is far more worth reading than anything by a mediocre writer, and it gripped me from beginning to end.


The third book I read was The Last Elf by Italian author Silvana De Mari. It is a little obsession of mine, reading on holiday a book written by an author of the country I'm visiting. We publish very few children's books in translation in the UK, sadly. Yorsh the elf is discovered by a woman and a hunter as a little child. Elves are both despised and feared in his world, and the trio are imprisoned by the dictatorial leader of a town where they are discovered. In prison, Yorsh discovers part of a prophesy which implies that his destiny, as the Last Elf, is tied up with that of the Last Dragon, and they travel to the abandoned library where the dragon lives.

Some years later, a girl named Robi is in an orphanage in the town where the trio were imprisoned. The overseers of the orphanage abuse and underfeed the children, and set them against each other. However, one day when the children are working in the fields picking fruit, they see a dragon flying overhead, with a small figure riding it. How is Robi's destiny tied up with these two?

This novel is more gently paced than Young Adult novels in English. It has a dreamlike quality which was very enjoyable, although in places I felt it lacked impact. Unfortunately it seems that no other De Mari novels have been translated; but I'll be seeking out more translated works than I have so date. My horizons need broadening!

I'd recommend all these novels for confident readers of 12+.
Posted by Ali at 17:31