Two weeks ago I went to see the Cult of Beauty exhibition at the Victoria and Albert Museum, London. On the Aesthetic movement of 1860-1900, it outlined the movement's impact on art, architecture, literature, interior design, fashion, and some of the political and cultural influences on it.

Some of the exhibits strongly reminded me of two books by Louisa May Alcott: Eight Cousins (1875) and its sequel, Rose in Bloom (1876). Published in the decade following the great success of Little Women, Alcott used the novels to outline her political and educational philosophy, based on that of her father, Trancendentialist philosopher Amos Bronson Alcott.

Eight Cousins is the story of recently orphaned Rose Campbell. She has come to live with her great aunts while her guardian, Uncle Alec, is away at sea. Her aunts are loving but old fashioned, and when we first meet Rose she is feeling a little sorry for herself. Uncle Alec has very advanced views, through which Alcott is able to promote her ideas about diet, feminism, fashion, philanthropy and bringing up girls. Many of these appear to be Alcott's father's ideas, but they resonate with many of the Aesthetes' tenets, outlined in the exhibition.

On Uncle Alec's arrival, Rose is presented with many mementos of his travels, decorating her room in a way that would have delighted Aesthetic taste: bamboo furniture, a Japanese screen, a painting of the Madonna and a blue and white jug and bowl. Japanese porcelein and paintings had been arriving in the West since the 1860s, after the end of the Kaei era of seclusion of Japan; French artists were particularly influenced by Japanese woodblock printing, and Little Women paid for May Alcott, Louisa's artist sister, to visit Paris. Later in the story Rose goes to the harbour and meets Chinese merchant Mr Whang Lo and his nephew, Fun See, and is presented with a fan, packets of tea and a tea service. In Rose in Bloom, Fun See marries one of Rose's closest friends. 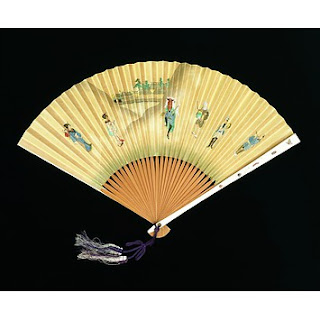 (Image: Victoria and Albert Museum. This fan is Japanese but was made in 1870s).
Uncle Alec has very advanced ideas in woman and girls' dress; firstly he loosens Rose's tight leather and steel belt so that she can breathe freely and run; later he stops fashionable Aunt Clara from dressing Rose in ultra-fashionable style. The description is similar to the costume on the right: 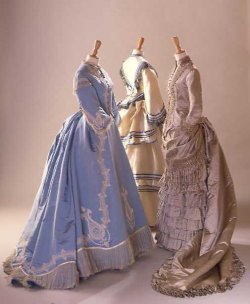 (University of Texas collection)
"The upper skirt was tied so tightly back that it was impossible to take a long step, and the under one was so loaded with frills that it "wobbled"- no other word will express it- ungracefully fore and aft. A bunch of folds was gathered up just below the waist behind, and a great bow rode a-top. A small jacket of the same material was adorned with a high ruff at the back, an laid well open at the breast, to display some lace and a locket."
Uncle Alec advocates dress reform; Rose is dressed in "pyjamas" or pantaloons with a dress over the top; described as being to the top of her boots, Rose's dress is longer than the one pictured: 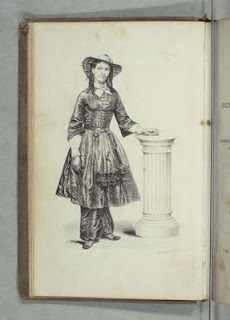 (Teachushistory.org)
The Aesthetic dress in the Cult of Beauty was of a later period. I was particularly taken with this Liberty one: 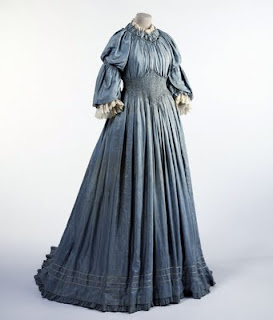 (Victoria and Albert collection)
It could be worn without a corset and lacks the embellishment of much late Nineteenth Century fashion.
Any readers wanting to read more of Alcott's feminist writing for girls could also try An Old-Fashioned Girl, which advocates independence and employment for young women, an urges practical philanthropy and fair wages for working women.
﻿
﻿
Posted by Ali at 20:18