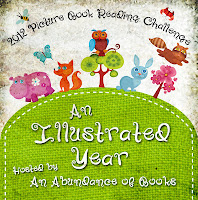 I have realised that I am two reviews behind in the illustrated year challenge, so I am combining two books with a linked theme.

Michael Rosen's Sad Book was written in the aftermath of the former Children's Laureate losing his 19 year old son Eddie to meningitis. It is a beautiful and heartbreaking evocation of grief and bereavement, demonstrating that we may be feeling sad while not showing it; that sometimes unhappiness may come out in anger and destructiveness as well as in tears. Quentin Blake's illustrations truly are a visual realisation of Rosen's words. This is a fantastic book; one I would urge teachers and parents to buy. In my 20 years of teaching, there was never a year that I did not have a class where at least one child was affected by loss- of a grand parent, parent, sibling, once of the head teacher of the very small village school I was teaching in, and once, horribly, of a child in my class killed in a road accident. If nothing else, the death of a loved family pet can be a devastating loss to a child, realising sometimes for the first time that parents and medicine really cannot do anything to halt the inevitability of death. I wish I had had this book when I was still teaching in the classroom. I recommend this for 6+, to be read with an adult.

A Monster Calls by Patrick Ness, illustrated by Jim Kay, is deservedly a joint winner of the CILIP Carnegie and Kate Greenaway awards  for the best children's book and best illustrated book in June 2012. The novel is inspired by an idea from the late, great Siobhan Dowd, who herself won the Carnegie posthumously for her novel Bog Child.

13 year old Conor has been having nightmares about a monster. One night he wakes up at 12:07 and hears a voice calling him from the garden. He looks out of the window and sees a monster; a huge creature of human shape, but made of branches, twigs and leaves, like the yew tree in the nearby churchyard. The creature insists that he has been summoned, and that he will tell Conor a story, in return for which Conor will tell him about his nightmare.

Conor's mother, we learn, has terminal cancer, but he cannot accept this. His parents are no longer together; his dad is living in the US with his new wife and baby. His grandmother is a busy professional woman, and is also processing her own grief at the imminent loss of her daughter. Conor also has problems at school. The monster's intervention (always at 12:07) in these problems initially seem to make things worse, but ultimately Conor comes to realise that he must accept the inevitable and say goodbye to his mother.

Again, Ness demonstrates that grief and hurt do not make us nicer people, as Victorian storybooks would have readers believe. Conor's fear and despair at losing his mother makes him behave quite cruelly to his friend, to being destructive to both objects and to people. Ultimately, the monster's stories, elliptical and baffling as they seem, make greater sense to him than teachers' well meaning platitudes.

Jim Kay's black and white illustrations are incredibly atmostpheric. He describes here  sitting in the back of the car driving through the countryside as night fell, and the way that familiar objects can seem sinister as they lose definition. The monster, in particular, is perfectly realised; anyone who has hurried down a dark lane between streetlights or by torchlight in the winter will recognise jumping at what seems to be monsters out of the corner of one's eye; on closer inspection they are bushes, or dustbins.

This wonderful book is highly recommended for confident readers of 9+. It is written in straight forward, clear prose, but is no less profound for that.
Posted by Ali at 15:00