An Illustrated Year 6- The Colour of Home by Mary Hoffman 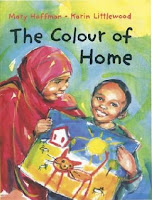 Hassan has just arrived from Somalia. Even though his new teacher and classmates try to make him feel at home, everything is very strange, including the English language. His teacher gives him paper and paint and asks him to paint a picture.

At first Hassan draws his family and home on Somalia, all vibrant colours, but then through his picture he displays the war and violence that drove his family from their home. The next day at school there is a Somali interpreter, so that he can explain his family's story to Miss Kelly. He then paints another picture for his family and plays football with a new friend in the playground. Back at his family's new flat, he can see the colours of home, both from objects from his old life in Somalia and the new life that his parents are trying to create.

This book has beautiful illustrations by Karin Littlewood, with the colour palette changing to reflect not only Hassan's life in Somalia and his life in his new country, but also his emotional state. Interestingly enough, many American reviews that I have seen assume that Hassan has moved to the USA, although the new country is not specified. I'd assumed that the new country was the UK due to him playing football (soccer)- maybe this is changed in American editions? In any case, it shows what a universal and powerful story it is- it really could be understood by any European, North American, Canadian, Australian or New Zealand child.

I recommend this book to read with children 6+ during Refugee Week (18th-24th June), or indeed at any point that you wanted to discuss war and migration. It is a very simple though powerful story. Salusbury World, based at Salusbury Primary School, North West London, has some great ideas for lessons using The Colour of Home to discuss refugees and support children's development of empathy.
Posted by Ali at 08:00