Last year Norton Juster's The Phantom Tollbooth turned 50. It is the story of Milo, a normal boy who discovers a mysterious package in his bedroom. Milo is not interested in anything. When he is in, he wants to be out; when he is out, he wants to be in. But he summons up the energy to open the package. Inside, he finds a toy tollbooth. He gets into his toy electric car (of which he is bored) and drives through the tollbooth, and is transported to a magical land: the Kingdom of Wisdom, through which he travels with Tock, the watchdog 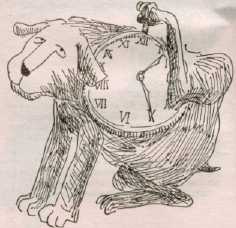 to rescue the princesses Rhyme and Reason from the Castle in the Air.

The comical characters (my favourite is Faintly Macabre, the Not-So Wicked Which), word play and literal exemplifications of idioms- for example, Tock can carry Milo through the air, since "time flies"- is reminiscent of Lewis Carroll, and also the recent China Mieville  Young Adult novel Un Lun Dun. 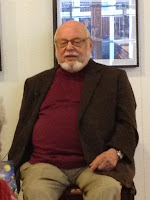 I went to hear Norton Juster talk about The Phantom Tollbooth with author and journalist Nicolette Jones at the famous London bookshop Foyles. He was a superb raconteur, who explained that his love of wordplay came from his father. He said that he was much like Milo as a child, often bored at home and uninterested at school. However, he said that he felt that the need to entertain himself as a child made him creative (he was an architect as well as an author) and stated his concerns about today's over-scheduled children, who rarely have time to play freely. Interestingly, Juster also stated that he is synaesthesic, associating colours with numbers. One of the characters that Milo encounters is Chroma the Great, the conductor of an orchestra that plays the colours of sunset.

I have loved this book since I was 9. I bought my third copy yesterday, as my previous two copies have fallen apart. I don't think I fully understood all the puns and wordplay then, but I loved the strange characters and the map at the beginning of the book! (All fantasy books should have maps, in my opinion). I hope that you read it and discover it yourself. The 50th anniversary Harper Collins edition that I bought has an introduction by the late Diana Wynne Jones, which was a lovely discovery.