Today I am delighted to have a guest post from Juliette Harrisson, from the wonderful Pop Classics blog. 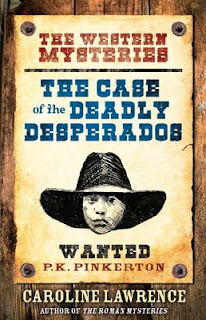 
This book was received as a review copy from the author, but the review represents my honest opinion.
The Case of the Deadly Desperados in the first in a new series by Caroline Lawrence, author of The Roman Mysteries, a bestselling series of children’s detective stories set in and around ancient Rome. I’m a big fan of The Roman Mysteries, but since I have a PhD in Roman history, I always have a slight feeling that I’m working when reading them. This means I absolutely loved getting stuck into this Western Mystery, as I know nothing whatsoever about the Wild West! (I’ve read exactly one book about it – Charles Portis’ True Grit – and seen exactly two films – Butch Cassidy and the Sundance Kid and True Grit (2011)).

The story follows PK Pinkerton, who comes home one day to find his foster parents murdered and three desperados hunting him for a valuable document left to him by his biological father. PK ends up in Virginia City, where he encounters treacherous hurdy-gurdy girls, helpful poker aces, talented artists and one soon-to-be-very-famous writer. The story is fast-paced and full of danger and excitement, and the setting described beautifully, all dust and sand and heat.
The thing I loved most about this book was the narrative voice, which is, essentially, a direct cross between True Grit and Mark Haddon’s The Curious Incident of the Dog in the Night-time. Like True Grit’s Mattie Ross, PK speaks with nineteenth-century syntax and vocabulary, using no abbreviations and speaking in a very formal and correct manner, with just a few bits of Western slang thrown in. Like Curious Incident’s Christopher, he is autistic, though without the benefits of a diagnosis and a social worker. The most useful thing about this for the book is that although PK feels, he witnesses such traumatic events as the murder of his foster parents without showing much emotion outwardly, which allows the story to keep up a fast pace and avoid dwelling too much on the trauma of such an event. The disadvantage, of course, is that unlike The Roman Mysteries’ Flavia Gemina, he finds it difficult to make friends and lacks a close-knit group around him, though that may develop over the course of future books.
When I was about ten years old, I used to read the Babysitters’ Club books and I used to assume, as I did with everything I read, that they were set in Britain. I’d never heard of Connecticut, so I assumed it was somewhere in the Home Counties and became very confused when one character took a train to New York City, which I did know was across the Atlantic Ocean in America! With this in mind, British children reading this book may need to ask their parents and teachers to explain some things to them, like the meaning of ‘Temperance’ or where Dayton is. However, the Glossary at the back will help with most of the things they haven’t heard of and the story is perfectly comprehensible without intimate knowledge of the setting. Parents may also need to explain the in-joke in the book’s opening, in which the author claims, after the style of Mark Twain, that this is a true story, but I expect most modern children, who are used to books with authors like Lemony Snicket, will understand.
The theme of the deceptiveness of appearances runs neatly through the book, brought out using a series of disguises that are both amusing and educative – as PK changes costume, the reader sees just how much the reactions of those around him to his presence change. With a limited ability to use facial expressions, PK is a character who identifies himself to the world around him through costume. The way he uses costume to control how people view him is clever and carries with it the subtle message that looks can be very deceiving, a thread that also runs through his conversations with Poker Face Jace on the subject of faces, feet and poker tells.
I have a great fondness for first person narrative and for books with a really clear or unusual voice, so I was hooked on this story from the first page! You can hear the Southern accents as you read, and each character’s vocabulary clearly reflects their accent and origin, which really brings them to life. This story gave me a rich introduction to a place and time I’m entirely ignorant of, and I can’t wait to see what PK does next – I look forward to Book Two!
Posted by Ali at 15:49