Last April, I visited the London Book Fair. While I browsing the Australian publishers' stand, a book caught my eye.

I was lucky enough to get hold of a copy of Jen Storer's Tensy Farlow and the Home for Mislaid Children. The story of a mysterious red-haired orphan, found by truck driver Albie Gribble after she has been dumped in the River Charon. Something nasty is in the water, the evil Matron Pluckrose is after her when she is betrayed to the Home for Mislaid Children, and even worse, she has been born without a Guardian Angel. How will Tensy survive the awful Home, with its murderous crows and mysterious Watchers? And what is the evil Thing living in the cave?  But all is not what it seems, and with the help of some rather unreliable angels and some of the other orphans, Tensy can show just what a special little girl she is. This is a beautiful looking book, and would be a great read for fans of A Series of Unfortunate Events. I just hope that it gets a UK publication soon. There's a great trailer here. 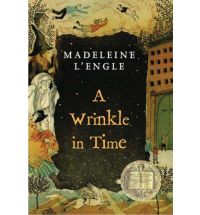 "It was a dark and stormy night", begins Madeleine L'Engle's award winning fantasy/ SF novel. (For Wikipedia's round up of other books riffing on Edward Bulwer-Lytton's famously purple prose opening line, see here.) A mysterious woman turns up at Meg Murry's house, Mrs Whatsit, who is a friend of Meg's gifted little brother, Charles Wallace. After drying her feet and eating a sandwich, Mrs Whatsit tells the Meg's mother "there is such a thing as a tesseract". The following day Meg learns that the tesseract is what her scientist father was working on before he disappeared. Meg, Charles Wallace and a popular boy from Meg's school, Calvin O'Keefe, go to visit Mrs Whatsit, where they meet Mrs Who. That evening, Charles Wallace tells Meg and Calvin that they must go with Mrs Whatsit and Mrs Who to rescue their father. They meet the Mrs Whatsit's third friend, Mrs Which, and travel through the tesseract, the wrinkle in time, to the planet Uriel where they learn about the threat from the evil Black Thing. They learn that Mrs Whatsit, Mrs Who and Mrs Which are angels, who help them travel to another planet, Camazotz, controlled by an autocratic mind reader, IT, where the children must battle to save their father.

First published in 1962, A Wrinkle in Time is considered a classic in the USA. It is interesting to compare the portrayal of angels in the book with those in Tensy Farlow. The three Mrs Ws remind me strongly of Mrs Doasyouwouldbedoneby, Mrs Bedonebyasyoudid and Mother Carey in Charles Kingsley's The Water Babies:

not because they are strict, didactic and punitive, but because they are they holders of knowledge and power. The children must learn from them (particularly Mrs Whatsit) to obtain their desire, as Tom must learn from the fairies in The Water Babies. The angels in Tensy Farlow are fallible beings, unreliable and confused. The power (although not the knowledge) lies with Tensy and her ability to inspire others to act for themselves. This is an interesting contrast. L'Engle was an Episcopalian, a commited Christian- however this has not stopped the books being on the American Library Association's list of the most frequently challenged books, for its unconventional approach to religion.