The author, Stephanie Burgis, very kindly arranged for me to be sent the uncorrected proof of A Tangle of Magicks, but this post reflects my true opinions of her novels.

Burgis has set her novels in a Regency England where magic exists, but is considered highly improper. A group known as the Guardians regulate the use of magic, protecting society from malicious or harmful use; the starting point of the first novel is that the protagonist (and narrator), 12 year old Kat Stephenson, discovers that she is a member of the Guardians, and her older sister, Angeline is a witch. This proves to be a serious embarrassment to the family since the eldest Miss Stephenson, Elissa, has bowed (with some enjoyment of her martyrdom, as Kat sardonically notes) to pressure to repair the family's finances since their brother Charles has gambled much of it away and her country parson father has almost bankrupted himself paying the creditors. Their stepmother is unsympathetic to any hint of romanticism in the girls' views of marriage, being firmly of the opinion that Elissa must do her duty. Kat decides that it is down to her to save her sister, but how?
However, Kat's antagonism towards her fellow guardians, who are disparaging of her dead mother, leads to her powers being uncontrolled; in addition Angeline has found her mother's magic books and has cast a spell calling her "true love" to her, who proves to be a young man called Frederick Carlyle who inconveniently follows her about proposing to her, and then the family is invited to a country house party full of the best Society people where Elissa is to meet the man she is to marry.
This was a great, fun read which made me giggle on public transport. If I say it is for me a mix of Georgette Heyer and Diana Wynne Jones, I do not mean that it is derivative (and indeed, I love both of these writers). It mixes a Regency romance with rakes, snobbish dowagers, highwaymen and impecunious, beautiful young women with Wynne Jones' use of magic both to unsettle characters and illuminate their true selves. 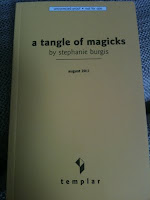 The second in the series (due out in August- see Stephanie read the opening here﻿) starts dramatically at Elissa's wedding, where Angeline and Kat are bridesmaids and Frederick is the best man. Kat's impetuousness has resulted in her causing offence to a very poweful Society lady, who decides that Frederick's mother should know what kind of family he is getting involved with, and Mrs Carlyle arrives to save her son. She is a marvelous creation; dramatic, rude and great fun.
With Frederick and Angeline's engagement broken, and the scandal created at Elissa's wedding, the Stephensons set off for Bath to stay with Kat's stepmother's relations, the Wingates. During her stay Kat encounters the head of the Guardians, her putative Guardian tutor, Mr Gregson and becomes friendly with Lucy Wingate. There is development of some of the characters who stayed in the background in the first book, such as Charles and the Rev Stphenson, and I felt that Stepmama becomes a rather more sympathetic character: as Fay Weldon has pointed out in her Letters to Alice on First Reading Jane Austen, failure to attract a comfortably off husband was a serious issue for a young woman in Regency England. Women who did not marry were not able to have a profession (Austen herself earned very little from her novels), and they would become a burden on their families.
I really enjoyed these books, and am looking forward to the release of the third next summer. I particularly enjoyed the depiction of the loving yet exasperated relationship that can exist between sisters, and the invocation of Sulis Minerva at the Roman baths in the second novel through the hi-jinks of some Cambridge students was particularly striking. Highly recommended to 9+.
Edit: If you like the sound of A Tangle of Magicks and you live in the UK, enter a competition on Facebook to win it.
Posted by Ali at 15:40