Monday 11th April to Wednesday 13th April was London Bookfair at Earl's Court Exhibition Centre. It''s a great opportunity to go and see what's out there in the world of books, what will be released and some interesting new marketing. 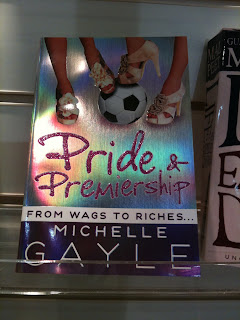 This alarmed me terribly, until a friend told me that former WAG (this stands for Wives and Girlfriends, as the partners of sportsmen are termed; funnily enough the partners of Paula Radcliffe and Victoria Pendleton are not called HABs) Michelle Gayle- yes, Hattie from EastEnders- has run a lot of workshops with teenage girls to try to raise their aspirations beyond marrying a rich man. I downloaded the first chapter from here: http://www.prideandpremiership.co.uk/ and it strikes me as being a version of Bridget Jones Diary rather than Pride and Prejudice. It is being released on mobile phone; you can receive it by texting Pride to 60300. I think that this is an interesting marketing move, likely to appeal to the teenage girls that this book is aimed at. 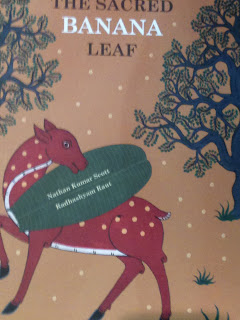 I am only sorry that my rather poor iPhone photo of this beautiful picture book from Tara Books can't do it justice. While publishers are creating books that feel this good, I cannot see eReaders taking off for young children. The paper is glossy and thick, and the cover is cloth, and feel wonderful as well as looking beautiful. I can imagine creating some fabulous artwork with children based on the illustrations. The Sacred Banana Leaf is a trickster tale from Indonesia (other famous tricksters are Anansi from the Caribbean and West Africa, Clever Tortoise, also from West Africa, or Br'er Rabbit from southern USA). Have a look inside- the illustrations are beautiful, in a style of painting from South East India, where Tara Books is based. Another book by the same author, Nathan Kumar Scott, is Mangoes and Bananas. Zoe from Playing By The Book introduced me to Tara Books, and in her excellent blogpost about another of Tara's books, Do! All of these books are highly recommended. You can order direct from Tara, or from Amazon. Or I'll bet your local bookshop would order them for you. 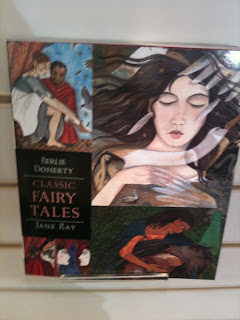 I was really pleased to see that Walker Books is reissuing Berlie Doherty's  Classic Fairy Tales. It is richly illustrated by Jane Ray, and goes back to the original versions of the tales (Grimm, Anderson, Afanashev etc) rather than the Disney versions that many children consider the "correct" versions. Of course, the Grimm tales are from the oral tradition so are subject to change from country to country, but the original versions were much less "pretty" than the stories children hear today. This book is glorious and a real investment for parents or teachers- children will love it and want to hear or read it again and again. Berlie Doherty is a wonderful writer; she has won the Carnegie medal twice (for Dear Nobody and Granny Was A Buffer Girl, the story of several generations of a Sheffield family). My personal favourite of her work is Children of Winter, about the Derbyshire village of Eyam, which in 1666 cut itself off from the outside world when a traveller to the village infected it with plague. It was dramatised by BBC radio; listen out for it on BBC Radio 4 Extra.

While wandering about I came across an Australian Publishers stand, where this caught my eye: 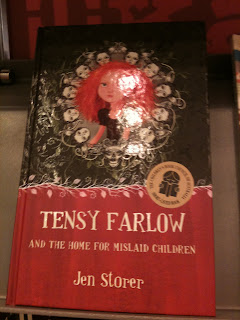 This book was nominated for a number of children's awards in Australia, and received good reviews, but unfortunately hasn't got a UK publisher. I've ordered it from Australia (gulp) and will report back. I'm intrigued by another use of social media by children's/ Young Adult publishers (Pride and Premiership has its own Facebook page, for example)- the Youtube trailer. I think that this is fabulous- it builds anticipation and interest the way film and TV trailers do. I think it would be brilliant to have children in school making trailers for their favourite books- much more interesting than writing a book review!

Finally, I got a couple of uncorrected proofs from a kind lady at Frances Lincoln (there were far fewer freebies than I remember from previous visits!): Too Much Trouble by Tom Avery, which was the winner of the Frances Lincoln Diverse Voices award in 2010. It's the story of Emmanuel and his brother Prince, who escape from a war torn central African country to London, but don't find a safe haven and are soon lost and alone on the streets of London, and The Rabbit Girl by Mary Arrigan, which is set in present day London and wartime Lake District and looks intriguing.

After all this, it was lovely to meet Zoe from Playing By The Book, and we staggered to Drummond Street, behind Euston Station, under the weight of book catalogues and had a delicious vegetarian curry at the venerable Ravi Shankar bhel poori house. A superb day out.
Posted by Ali at 21:01