How High The Moon? 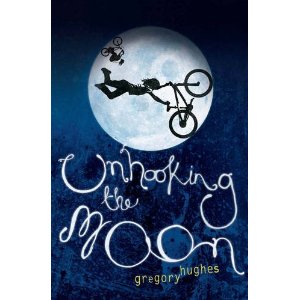 According to 12-year-old Bob De Billier, Winnipeg is so flat that "you can see your dog running away for three days". Bob and his 10 year old sister, Marie-Claire (known as The Rat), live there with their dad. Bob has just finised elementary school, he has a crush on his exchange student teacher from Venezuela, and he has plans for the summer holiday with his "Native" friend Little Joe. Then the first day of their holiday, their father dies, and their lives change.

Marie Claire is the impetus behind the siblings'  decision not to report their father's death to the authorities (The Rat is afraid that they will be separated and put in homes with the "goddamn paedophiles" that their father has warned them against) but to travel across Canada to New York, to find their long-lost "drug dealer" uncle. Along the way they encounter hustlers, a smuggler, the latest New York rap star, and eventually a "goddamn paedophile", but not where it might be expected.

The story is narrated by Bob, but The Rat is the star. She is in the fine tradition of sparky pre-teen heroines such as Neil Gaiman's Coraline, but she is no archetype- a rap-and-Sinatra loving, mocha-addicted, snobbish proud Winnipegger, who has visions of the future and is suffering increasingly frequent and severe seizures. The Rat's voice is entirely her own; a story-teller, myth-weaver, who talks Bob into trouble and then both of them out of it, and along the way spell-binding New York Irish doormen, an insurance fraudster and a rapper (amongst others) into her crazy plans, she is enchanting. She makes a story which could be mawkish or entirely unbelievable funny and touching rather than overly sentimental.

Gregory Hughes, who could be a fictional character himself (a 50 year old Liverpudlian currently resident in Vancouver, he has been a deep sea diver, a bicycle courier and spent some time homeless, and has lived in Reykjavik, Toronto and New York, amongst other places) beat Charlie Higson and former winner Marcus Sedgewick to the Booktrust Teenage Fiction Prize for 2010 with this, his first novel. It's a great read, highly recommended for anyone 11+. My only minor quibble is the ending- it isn't a conventional happy ending and the novel is all the better for that, but as a children's book Hughes has made it hopeful, but I felt it disrupted the rhythm of the narrative. However, I enjoyed it so much I chose it as the book I would bookcross for World Book Day (I wrote about it here).

I heard this  in my head often when reading the text- I imagined The Rat singing it with her dad while he made pancakes in the kitchen.
Posted by Ali at 21:24